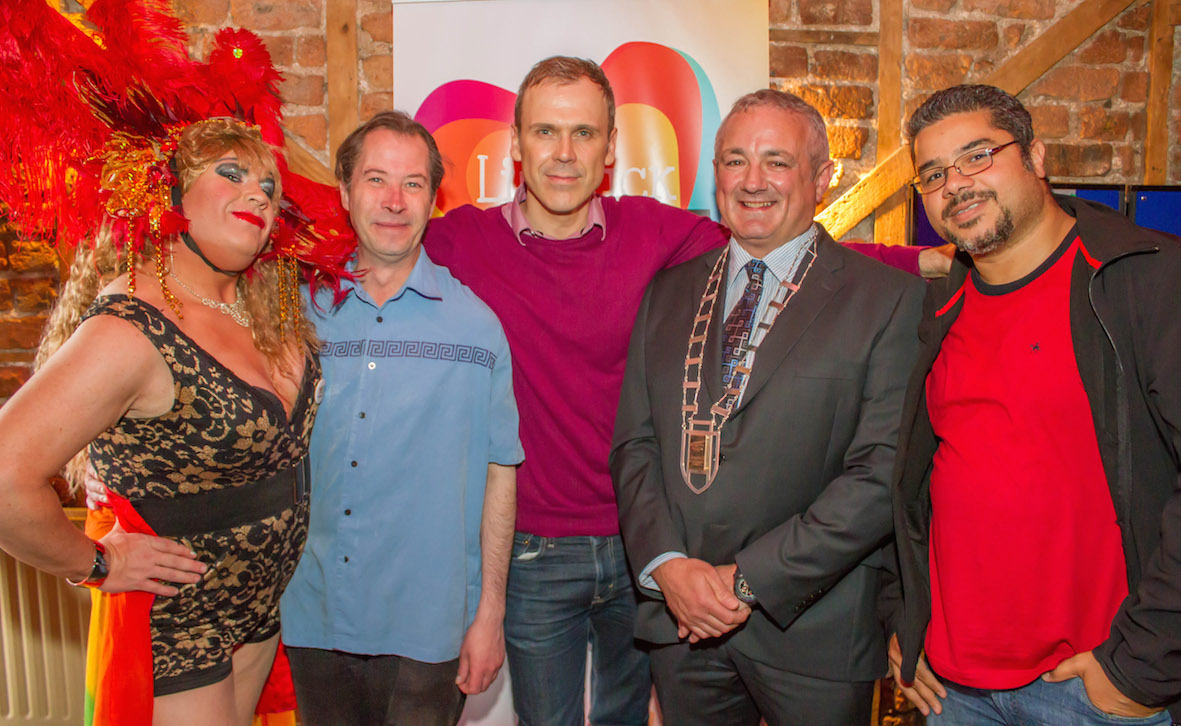 The countdown to Limerick Pride Festival 2015 officially began with the press launch at Dolan’s in Limerick City on Mon, June 29.

At the Limerick Pride 2015 launch Patrick McElligott, Chairperson of Limerick Pride said: “We are thrilled to be able to offer a fantastic line up for Limerick Pride 2015, running from Tues, July 14 until Sun, July 19. There is something for everyone culminating in the annual Pride Parade on Saturday July 18 and the PrideFest party directly after the Parade.  We want to welcome everyone to join us in celebrating LGBT culture in Limerick and show Limerick for the truly open and accepting city that she is. It is set to build on the success and positive energy of previous years festivals, promoting community spirit, community engagement and celebration. This past year the Irish LGBT community has received resounding support from the wider Irish community in their support of equal rights and marriage equality so this will be reflected in this year’s Pride Parade. We will celebrate our freedom and the opportunity we have been given as a community to develop the concept of the family unit within our community.”

Jerry O’Dea, newly appointed Mayor of Metropolitan District of Limerick, showed his support for the LGBT movement at the launch, adding: “In previous years, people who have participated in Pride have felt that this annual event was their only time to be truly express themselves. Since the passing of the marriage referendum, Ireland’s LGBT population has been joined by the wider population in celebration.”

The Limerick Pride Festival 2015 will be taking place starting on Tues, July 14 with events each day until Sunday July 19 and will feature a multitude of events, from educational workshops and discussions to evenings of music and club nights, to cater to the Pride needs of everyone.

This year’s Pride will have an educational aspect. Workshops will be held during the week covering topics such as a Coming Out, Sexual Empowerment and social groups for people of all ages, orientations and genders. All will be welcome to the workshops regardless of their sexual orientation giving the people of Limerick City an opportunity to get to know the Limerick LGBT community more and everyone is encouraged to get involved.

For the first time ever, The Mr and Ms Gay Limerick competition on Sat, July 11 will be held before the Limerick Pride festival at the Best Western Pery Hotel at 9pm, hosted by Paul Ryder with Regina George taking to the decks once the winners have been crowned to entertain us with the best party music around. Tickets are priced at €10.

The ‘Pride Wedding Show’, a wedding fair established in 2014 as part of Limerick Pride Festival, will take place on Wed July 15 at the Limerick Strand Hotel. Sharon McMeel, an award winning wedding planner, said about the fair: “We’ll have different suppliers and vendors there, so all couples regardless of their sexual orientation will have a good opportunity to get answers to their important questions if they are considering getting married. With the historic ‘Yes’ vote this year for the marriage referendum, we actually had many engagements on the day of the referendum. It’s great to be able to look out for all the people who have gotten newly engaged.”

The annual Pride Parade on Sat, July 18, bring some extra colour and music to Limerick City Centre, gathering at City Hall at 2pm, the Parade will make its way at 3pm up O’Connell Street, across Mallow Street to Henry Street, past Arthurs Quay Park and returning to the Potato Market for PrideFest 2015 – a showcase of LGBT Culture in Limerick that you will not want to miss!

This years Grand Marshall will be none other than Limerick legend, actor, director and playwright, Myles Breen. Myles has been a stanch advocate of LGBT rights for decades and in 2009 as part of Limerick Pride, staged his play “Language UnBecoming a Lady”, telling the story of one gay man’s life in Limerick and it left a profound effect on audiences in Limerick. Now as Myles is about to take the play to New York in Sept, it is fitting that he leads the community in their walk through the streets of Limerick celebrating their freedom and new-found equal rights. Myles said: “I am beyond honoured to be asked to be the Grand Marshall of this years Parade. Growing up in Limerick in the 70’s and 80’s, I never dreamed of one day leading a Parade through the streets of my beloved hometown in celebration of equal human rights for the LGBT community. It’s a dream come through and I feel my life has come full circle. I hope everyone comes out to help me celebrate!”

That night after Pridefest, the main “Climax Party” at Dolan’s Warehouse, will feature “Dragged Up” star Paul Ryder and guests Pixie Woo and Victoria Secret performing their colorful show full of energy and movement, followed by DJ Ruth on the main floor and a “Saved by the 90’s” party upstairs.

A full line-up for Pride week can be found at the Limerick Pride website, with updates on their Facebook and Twitter pages. Tag your photos and comments about this years Pride with #ExpressYourselfLimerick.