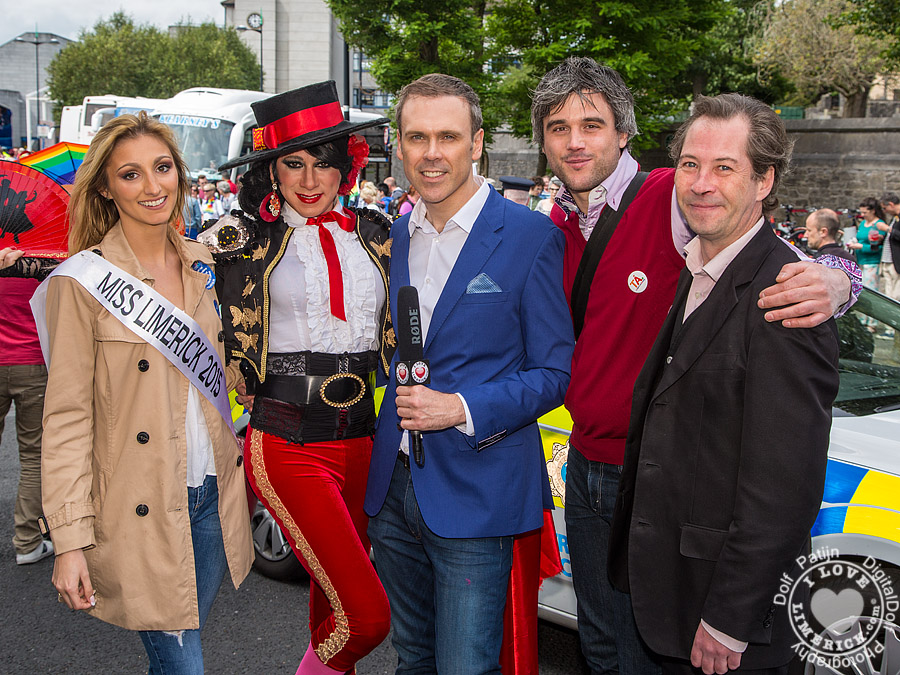 Limerick Pride Parade 2015 was held this year, Sat July 18, for huge crowds coming out to participate in this year’s festivities.

There has never been more reason to celebrate Limerick Pride than there has been this year, because of Ireland’s decision to legalise same-sex marriage earlier in May. National pride was celebrated after the marriage referendum but local pride in the decision was celebrated today, with three marchers carrying a Limerick flag near the front of the parade, with the words; “Limerick Said Yes”, printed on the front.

Elaborate outfits, colourful posters and rainbow pride flags covered the streets of Limerick City. A number of groups donated their time and effort to take part in the parade, as well as political parties Fianna Fáil, Labour, Sinn Féin and AAA showing their support.

The parade, leaving City Hall at 3pm, wound its way around our city, through O’Connell Street, Mallow Street and Henry Street, before arriving back at City Hall. The Parade Grand Marshall was Myles Breen, who rode in the back of an open-top car as it travelled the route of the parade. Myles, in his ever cheerful and charismatic manner, interacted with the crowds as he passed, and later referred to them as he addressed the growing crowds at the after-party: “I’m sure everyone who marched in the parade with me must have been overwhelmed by the response of people and with the positivity, respect and just sheer acceptance.”

Lisa Daly, chairperson of Limerick Pride, said the event was only possible ‘because of everyone coming together, not just as a country but for everyone behind the scenes, to send a very strong message that we’re all finally equal.”

Richard Lynch, Festival Organiser, said a few words at the after-party in The Orchard, saying ‘that now the LGBT community were equal in the eyes of the world in terms of Marriage Equality, our next goal is for complete equal rights of our transgendered brothers and sisters.’

Richard interviewed people on the day about what was the next step for the LGBT community in terms of equal human rights and the general consensus was that Trans people are among the most vulnerable members of Irish society and experience high levels of stigmatisation and marginalisation. Research shows suicidality, regular harassment and violence and systemic discrimination are commonplace. The good news is since June trans people in Ireland will now not have to rely on testimony from psychiatrists or endocrinologists to have their gender recognised by the state.

Instead, their self-declaration will be accepted, for the purpose of updating passports, driving licences, obtaining a new birth cert, and getting married. While the legislation is still not perfect, and we must not forget those under 18, non-binary people and people with an intersex condition, it is wonderful that Ireland recognised its citizens’ rights to determine our own identity. We are in a new era for trans rights in Ireland.

The Climax party, held in Dolan’s Warehouse on Saturday, wrapped up the day with performance by Dragged Up, later followed by DJ Ruth.

This year’s festival was focused around the theme of not only accepting others, but also accepting and expressing yourself.

Photos by Dolf Patijn for I Love Limerick. All Rights Reserved.

Photos by David Woodland Photography for I Love Limerick. All rights Reserved.

Photos by Jonathan Baynes for I Love Limerick. All rights Reserved.

Photos by Sophie Goodwin for I Love Limerick. All Rights Reserved.