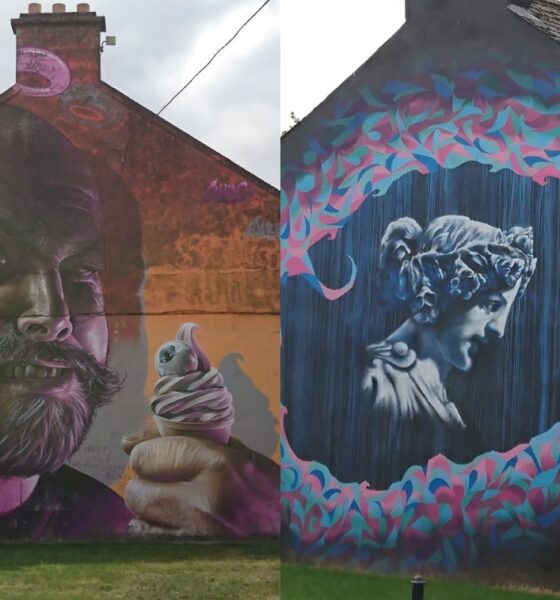 When thinking of street art, graffiti is usually the first thing to spring to mind. However, this is not the case in Limerick city, which is home to many amazing examples of street art. Street artists from all over come to the city to leave their mark, leaving the walls of the city covered in mesmerising artwork.

When we think of street art, our minds oftentimes wander to certain connotations of graffiti or vandalism, this, however, is not the case in the masterpieces seen around Limerick. Although we may admire the hard work of these artists, who is behind these astonishing pieces and what do they represent? It turns out that Limerick makes a great canvas for the creative mind of street artists.

Facilitated by Draw Out, a mural of Nora Quirke, who was more commonly known as ‘Dodo Reddan’ (1922 – 1995) is the latest artwork to join the walls of Limerick.

This fantastic piece was created by Ominous_omin and is located on the top of William Street. It depicts Dodo and her well-known pram full of dogs. After her death, it was found that she had been running what was essentially a one-woman Animal Rescue Centre, with her own limited resources and no financial support.

This is blowing our minds its so good. What an impact it makes as you enter the city centre.
Feeling so proud to be from Limerick !! @ominous_omin pic.twitter.com/DQA4uCagiz

While it has since been replaced, Glasgow based artist Smug was commissioned by the Limerick City Council as part of the Make A Move festival. Facilitated by Draw Out, he created the ‘Eye Scream’ mural on Castle Street in 2014 and proved to be an extremely memorable piece.

In 2019, ACHES, a Dublin based artist who specializes in what he calls ‘glitch graffiti’, replaced ‘Eye Scream’ with a beautiful tribute to Dolores O’Riordan. The mural was coincidentally unveiled the same day that The Cranberries were nominated for a Grammy award for their final album.

Limerick City and County council provided the funding of this mural to Draw Out as part of a series of murals of influential women.

Here, Dublin street artist ‘Aches’ wonderfully reimagines legendary singer Dolores O’ Riordan in a beautiful melody of colour in his tribute mural of the Cranberries frontwoman, a true treasure in the hearts of Limerick locals. The mural was also developed during ‘Draw Out’ and is located on Castle Street.

This haunting, yet captivating piece, created by artist Dermot McConaghy, an Irish artist who much prefers taking his creativity to the streets rather than an art gallery. McConaghy, who signs his pieces as DMC is known for his various murals throughout Dublin and Belfast.

Created in 2013 as part of the Make a Move festival, this artwork can be found at the junction of Anne Street and Thomas street in the Biodiversity Garden.

We Are All In This Together

Jonathan created this piece to highlight the difficulties we have gone through during the COVID-19 pandemic. He is a painting graduate of Limerick School of Art and Design, who has been creating street art for almost 10 years.

Belfast based artist Emic also collaborated with LMHA to create his piece, ‘Strength in Fragility,’ located on Nicholas Street. Emic has been contributing to the Street Art scene in Ireland for almost 10 years and hopes his piece provides a calming effect for those who need it.

The mural shows Kevin Greaney, who has sadly passed away, and Jim McCormack, who is recovering from a serious illness, who were both committed members of the band. 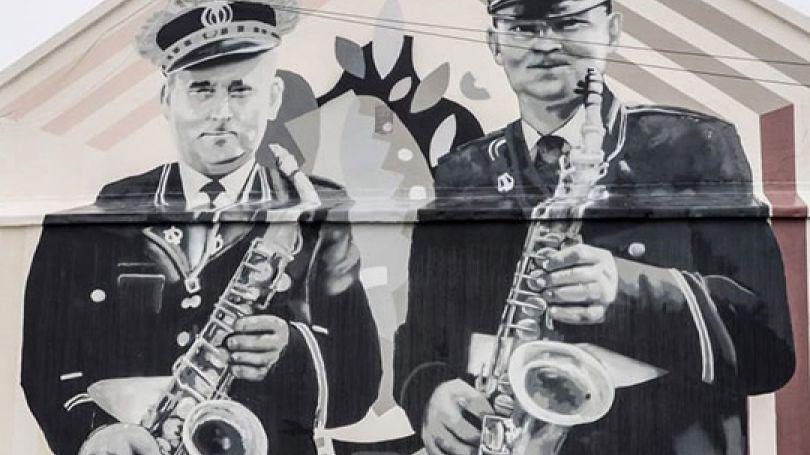 Australian artist Fintan Magee’s ‘The Fisherman’ is located on Roches Street. The piece was created in 2014 for the Limerick ‘Draw Out’ festival. The ‘Draw Out’ Festival was an attempt to liven up the streets and alleys of the city. Magee is known for his street artwork worldwide, including his pieces in the US, the UK, Germany, and Russia.  Fintan allows people to interpret his work in their own way by not using lettering and uses his work as a way to get a rough narrative across to people.

This charming otter themed street art located under the Shannon bridge brings a touch of nature and innocence to the street art of Limerick. The piece which was created by Mary Conroy was unveiled in 2018. Speaking of her nature fueled theme, Mary commented, “The idea behind that was to get people aware of the wildlife in the city, and the nature in the city, and get people to become aware again about the space, and animals they share the city with, so we can see Limerick as a green city, and an urban-wildlife friendly city.”

Lovely Lutra lutra mural to brighten up a grey Wednesday. @LimerickCouncil @Limerick_ie @LmkTidyTown Otters are wonderfully playful mammals. We are so lucky to have them live side by side with us in the city. @BioDataCentre pic.twitter.com/Nx8kDH2oZR

For more information on street art in Limerick go HERE

For more stories on art in Limerick go HERE

Related Topics:Limerick Street Art
Up Next