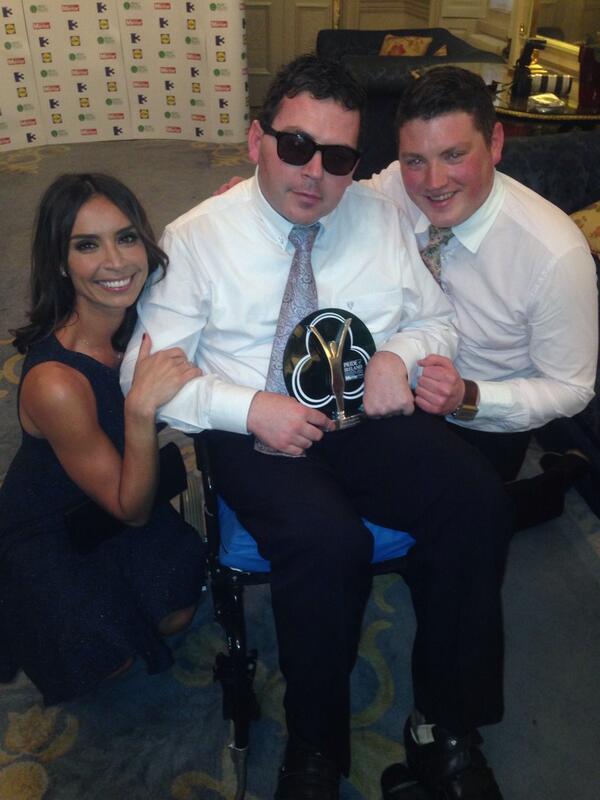 The first Pride of Ireland Awards took place in Dublin at the Round Room of the Mansion House on Tuesday, June 3. The celebratory awards ceremony was attended by Taoiseach Enda Kenny, as guest of honour along with many UK and Irish celebrities from the world of music, sport, TV and entertainment.

Limerick man Brian Hogan from Ballykeefe was one of 13 people who won a Special Recognition Award on the night. Brian was assaulted in the UK a number of years ago and with one punch his life was changed beyond recognition but he has never given up despite being brain damaged, paralysed and blind.  Brian now lives at an acquired brain injury unit in Limerick but he plans to move to his own home with the support of live in staff and regain some of his independence.  When making their award to Brian the judges said: “There were many times Brian could have given up but never once did he succumb.”

Brian’s sister Nevis Hogan who nominated him for the award, speaking on behalf of the Hogan family told me, “We are all so proud of our brother and son, Brian, who received this award for his determination to keep moving forward and warning young people of the dangers of one punch. He felt honoured to have met his fellow award winners whose stories are so inspirational too.”  Brian now wants to spread the message to youngsters about the dangers of how with one punch your life can be changed forever and that it is better to walk away.

Carol Voderman with Brian at the Pride of Ireland Awards

Speaking at the ceremony Taoiseach Enda Kenny said: “This is real and energetic and true to Ireland’s identity as a country whose people care about each other greatly. The 13 winners are the very backbone of Ireland’s society, the people who quietly make a difference without call for thanks or congratulations. Tonight there were 13 people on stage but I know there could have been many more people who were deserving of awards. I thank them for their care and kindness and Christian approach to life. They forge on in their special area – making a difference, making life better for everyone they meet. Their passion is compassion and their drive to help create a better Ireland is commendable. So it is an absolute honour for me to be here tonight amongst people who say they are ordinary, but whom we all know are extraordinary and I thank them for it.”

The distinguished judges included music mogul Louis Walsh, Saturday’s singer and Tipperary woman Una Foden, MMA champ Conor McGregor and Philomena Lee, the subject of the recent BAFTA and Oscar nominated movie ‘Philomena’ Speaking afterwards Louis Walsh said : “I was moved by the stories and uplifted by the response each winner got when they went on stage. These are the real heroes.”

For other stories about Brian Hogan go HERE.

For more information about the Pride of Ireland Awards go to www.prideofireland.ie.