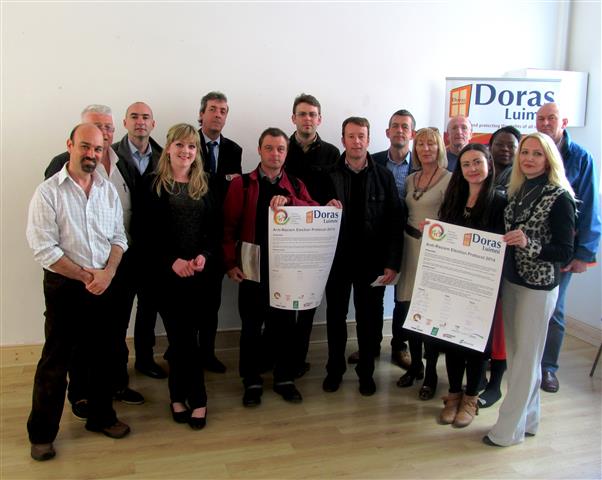 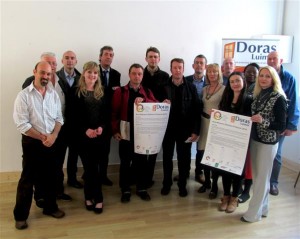 Doras Luimní is encouraged by the support from local election candidates.

Doras Luimní is encouraged by the strong show of support from local election candidates who have made a pledge to ensure that their campaigns would promote inclusion and reject racism.

In advance of the 2014 Local Elections, Doras Luimní invited all local election candidates in Limerick to demonstrate their commitment to anti-racism by signing the Anti-Racism Election Protocol at Doras Luimní’s offices. Candidates from a range of political parties attended the event and signed the Anti-Racism protocol document. Doras Luimní also gave a briefing on some of the issues around immigration and integration including some updates on the Intercultural Cities initiative, Anti-Trafficking work and the Anti-Rumours Campaign.

Since 2001, the Anti-Racism Election Protocol has played an important role in ensuring that elections have been conducted in such a way that they do not incite hatred or prejudice on the grounds of ‘race’; colour; nationality; ethnic or national origin; religious belief or membership of the Traveller Community. 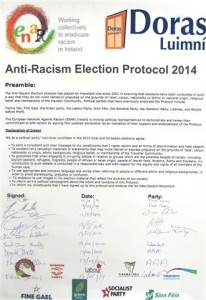 Doras Luimní in partnership with the European Network Against Racism in Ireland invited all candidates to sign the protocol as an indication of their own personal support and commitment to anti-racism. As Limerick has recently joined and committed to the Council of Europe Intercultural Cities initiative; Doras Luimní believes that a clear message of political support for anti-racism and the promotion of interculturalism would be timely and relevant.

Doras Luimní Integration Coordinator, Dr. Matt Cannon stated, “While there have been reports in the national media of racist incidents associated with campaigning, the strong show of support from local election candidates in Limerick for the signing of the protocol demonstrates that there is growing awareness around the issue of interculturalism and strong support to send a clear message that any form of racism is unacceptable. We were equally encouraged to hear from candidates that racism and negative attitudes towards immigration have not been major issues throughout this year’s election campaign to date and we hope that this is a positive development that will continue.”

To find out more about Doras Luimní visit www.dorasluimni.org.