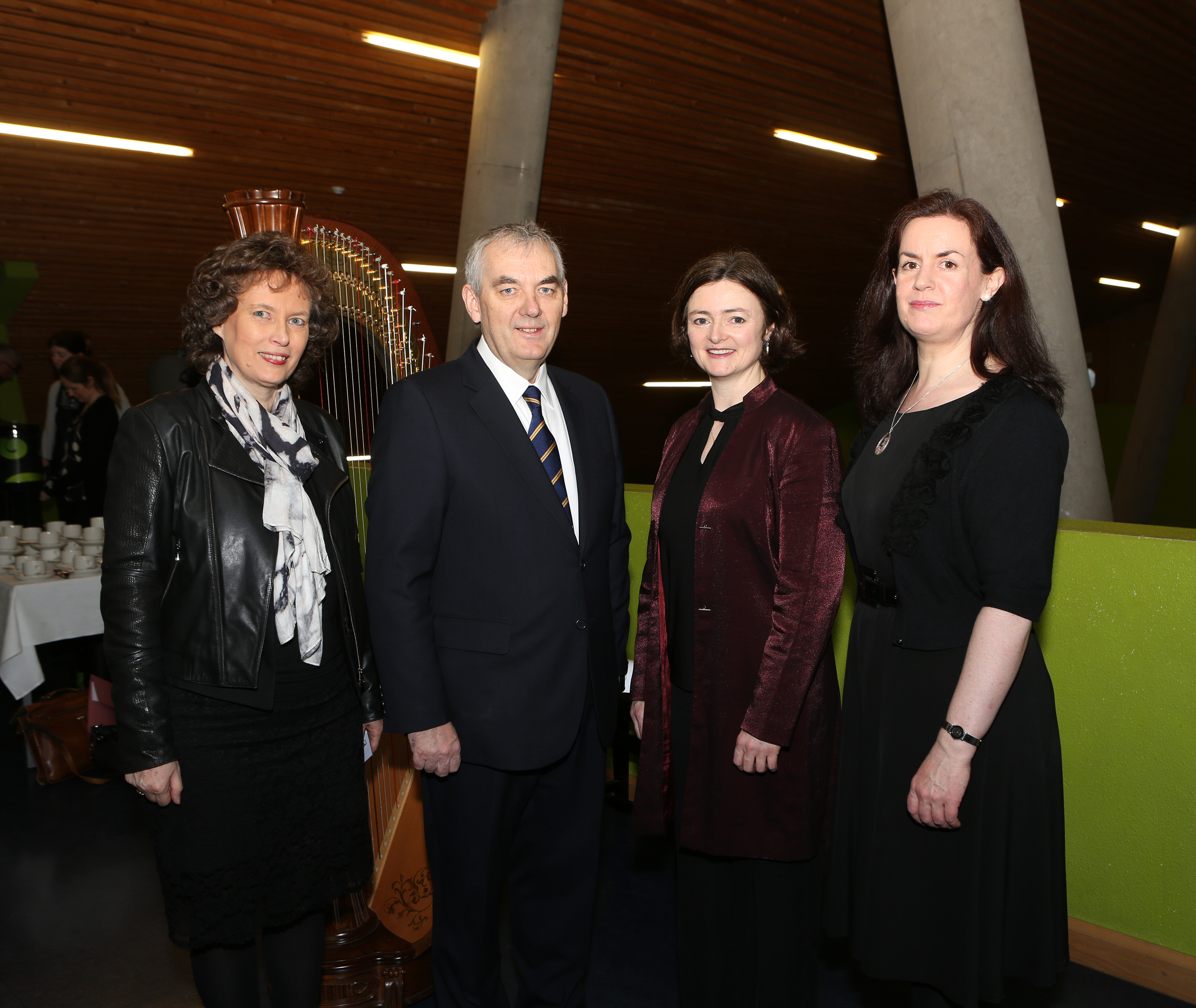 On Saturday 20th February, participants at a MIC 1916 conference in Mary Immaculate College were challenged to reflect on the legacy of 1916 though a wide variety of presentations and workshops. With contributions ranging from thought-proving keynote speeches on Pearse’s vision of education to critical reflections on the Ireland’s Own Magazine, the conference catered for many and diverse interests across a range of disciplines.

Hosted by the Department of Learning, Society, and Religious Education, the 1916: Memory and Vision conference provided a critical lens through which the socio-economic, educational and cultural climate of 1916 was explored. Taking a multi-faceted approach the conference discussed the events of 1916 and in particular, in the context of Limerick and Mary Immaculate College, within the backdrop of World War I.

Anne-Marie O’Farrell, composer-in-residence at Mary Immaculate College, pictured performing her own composition Songs for Ireland: A 1916 Trilogy at the recent 1916: Memory and Vision conference held at Mary Immaculate College. Organised by the Department of Learning, Society, and Religious Education, MIC, the conference commemorated 1916 through an exploration of socio-economic, educational and cultural policy and practice in 1916 and a comparison with policy and practice during the subsequent century.

Welcoming those in attendance Prof. Michael A Hayes, President of MIC, acknowledged the key role of the conference as part of a suite of 1916 commemorative events taking place in the College over the course of 2016. He also highlighted the development of research networks and projects as potential outcomes of the conference saying

“Concerns will be raised here today that will continue to be key issues and merit ongoing debate at local, national and international level. Debates which can be extended and developed at future events. We welcome your participation and encourage you to share your own ideas and to network among yourselves with a view to planning further debate”.

Both keynote addresses focused upon the educational vision and work of Pearse. Dr Eilís O’Sullivan, Lecturer in History and Policy of Education, MIC spoke of the women of Mary Immaculate College in 1916. In looking at the institution and at the lives of its students, she invited the audience to reflect upon some of Pearse’s contentions about the national school system of the time. Dr Brendan Walsh, from the School of Education Studies, Dublin City University delivered the second keynote address which also looked at Patrick Pearse’s educational thought and work, interrogating it in the light of school provision at the time and in the immediate post-independence decades.
Workshops served to complement the keynote speeches with many links made with Limerick and MIC.

The social and cultural life of MIC during the 1916 era was also explored through a reflection on the first graduates and a perspective on the evolution of the dress of the Mercy Order since 1916. Limerick life then and now was presented to the audience in the context of diversity, inclusion, health and poverty. The audience was also presented with an artefact which is very particular to Limerick, namely the beautifully crafted Gandloe and its journeys along the Shannon estuary. The focus of the conference then moved to Co. Tipperary as Easter 1916 in Thurles was presented through the correspondence of Fr. Michael Maher.

Many questions were discussed at the conference. These ranged from questions on the meaning of the words ‘Gael’ agus ‘Éireannach’ to questions regarding lesser-known histories and people. Many aspects of education were addressed and the audience was asked to think about how we cherish our children in today’s society. The Proclamation of the Irish Republic served as a backdrop to many of these questions.

The theme of the conference extended through the lunchtime break as participants were provided with a meal reminiscent of the food of the time. The Aramark catering team, led by Pat Brown, provided a very interesting food display, along with a slide show looking at the food industry in Limerick in 1916. During the break participants also had the opportunity to view a model classroom from the time, and Dr. Eileen O’Sullivan provided very interesting background information. The ‘Changing Faces of Ireland’ photographic exhibition, led by Brighid Golden, Ruth Bourke and Santhi Corcoran, also generated significant interest.

Those in attendance were also treated to a musical recital, entitled Songs for Ireland: A 1916 Trilogy composed and performed by Anne-Marie O’Farrell (harpist and composer-in-residence MIC) accompanied by Aine Mulvey mezzo soprano.

Conference co-ordinator, Dr Carol O’Sullivan, acknowledged the success and vibrancy of the conference and the fact that it served to bring together many different disciplines and interests saying “We hope that today is just the beginning and that the questions posed here will be discussed again in many other fora”.