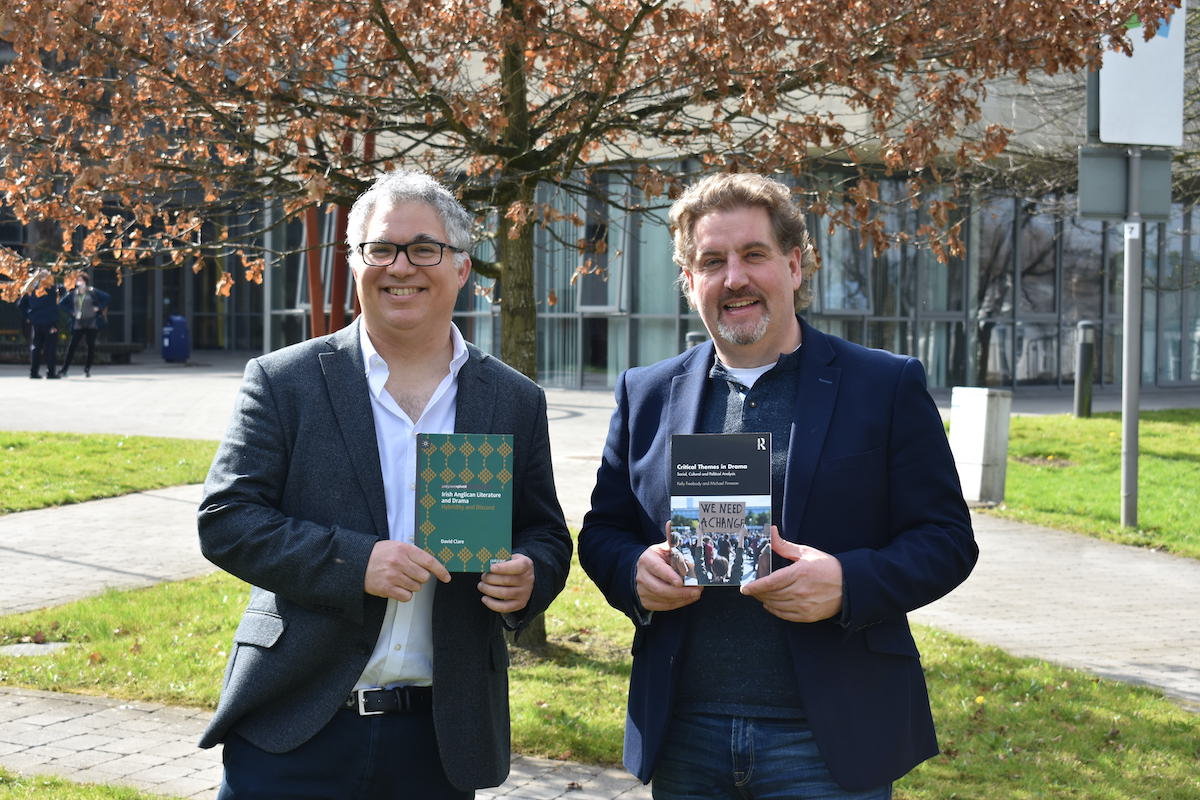 MIC Drama – Pictured above are Dr. Michael Finneran and Dr. David Clare whose two new books from were celebrated at a special event at Limerick’s Belltable.

Two new books from MIC Drama Department & Theatre Studies were celebrated at a special event at Limerick’s Belltable Theatre recently. The books cover divergent topics and timeframes, with one exploring the relationship between drama and the socio-cultural context of global affairs and the other discussing the key works of noted Church of Ireland writers historically.

Irish Anglican Literature and Drama: Hybridity and Discord by Dr David Clare, discusses key works by important writers from Church of Ireland backgrounds, such as George Farquhar, Jonathan Swift, Samuel Beckett and Leland Bardwell, in order to demonstrate that writers from this Irish subculture have a unique socio-political viewpoint which is imperfectly understood. According to Dr Clare: “The Anglican Ascendancy was historically referred to as a “middle nation” between Ireland and Britain, and Dr Clare’s book is an examination of the various ways in which Irish Anglican writers have signalled their Irish/British hybridity. Crucially, this book discusses several writers often excluded from the “truly” Irish canon, including, among others, C.S. Lewis, Erskine Childers and  Elizabeth Griffith.”

Launching Dr Clare’s book was best-selling author of Notes to Self, Emilie Pine, who said: “This is both an authoritative handbook to the particular hybrid culture of Irish Anglicans, and an illuminating series of case studies of often overlooked Irish writers from the 18th to 20th centuries. With a refreshing emphasis on women writers, Clare examines the intertwined influences of nation and religion, and gives new insight into writers whose work is central to any canon of Irish literature.”

Also launched at the Belltable Theatre was Critical Themes in Drama: Social, Cultural and Political Analysis, which was published by Dr Michael Finneran, Head of the Department of MIC Drama & Theatre Studies and Kelly Freebody (University of Sydney). Critical Themes in Drama, is concerned with the relationship between drama and the current socio-cultural context in the world. It builds on and contributes to ongoing scholarly conversations regarding the use, benefit, challenges and opportunities for drama and theatre as a social, cultural, educational and political act. It also provides a theoretical base for this conversation and explores the work of drama practitioners across the world to provide a map of how the field is shaped and how we might understand drama practice in theatres, studios, streets and classrooms.

You can find out more about Critical Themes in Drama HERE

Related Topics:belltablemary immaculate college
Up Next