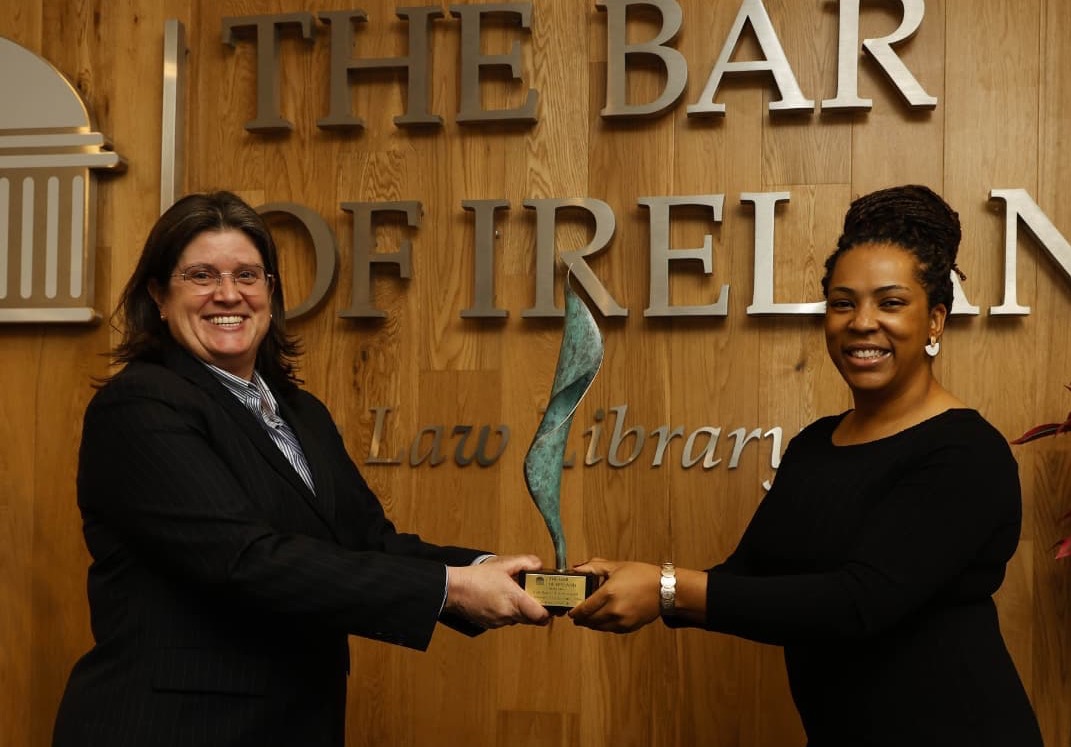 Movement of Asylum Seekers in Ireland co-founder, Donnah Sibanda Vuma, is presented with the Council of the Bar of Ireland’s Human Rights Award for 2021.

MASI activists celebrate their admirable achievement. The movement acts as a voice for asylum seekers and those living in Direct Provision centres.

The Movement of Asylum Seekers in Ireland (MASI) has won the Council of the Bar of Ireland’s Human Rights Award for 2021.

Limerick migrant rights activist and MASI co-founder, Donnah Sibanda Vuma, was presented with the award at the Bar of Ireland Law Library in Dublin last week, alongside other key MASI campaigners.

The movement does not accept members or appoint roles, instead acknowledging that all are welcome to come on board and do as much or as little work as they can.

Maura McNally, Chair of The Bar of Ireland, presented MASI co-founder Ms Vuma with the Human Rights Award, saying, “MASI’s steadfast campaigning and advocacy should serve as a vital reminder to politicians, lawyers and society in general of the importance of human rights, the bedrock of any democracy and rule of law.”

In addition, barrister Joseph O’Sullivan, Chair of the Bar Council’s Human Rights Committee, said of the movement, “MASI has campaigned on behalf of some of the most vulnerable people in our country. The movement is to be congratulated for their unbending commitment to the welfare of those who are in Direct Provision, those who are seeking to integrate into the community, as well as being an important voice in policy debates and formulation.”

We are delighted to present the 2021 Human Rights Award to @masi_asylum Movement of Asylum Seekers in Ireland.

⚖️For their contribution to the human rights framework & shining a light on a defining human rights & dignity issue.

Donnah Sibanda Vuma is also the founder of Every Child is Your Child (ECIYC), a Limerick-based community group that provides back-to-school financial support to children in Direct Provision. This charitable feat is achieved through several fundraising events held throughout each year.

Ms Vuma, originally from South Africa, came to Ireland in 2014 with her two children and lived in Direct Provision for several years. Since arriving in Ireland, she has worked to better the lives and opportunities of asylum seekers here, alongside migrant support organisation Doras.

In addition to activism, this inspiring Limerick lady has also embarked on an educational journey, currently studying for a Masters Degree in Peace and Development Studies at the University of Limerick.

Speaking at the Council of the Bar of Ireland’s Human Rights Award ceremony, MASI co-founder Vuma said, “What a great honour to be awarded the Human Rights Award for 2021. This is an important recognition of MASI’s work with those in Direct Provision, and in the community, advocating for better legal and social protection as well as access to state services, including education”.

To learn more about the Movement of Asylum Seekers in Ireland (MASI), go HERE

Related Topics:Council of the Bar of IrelandDonnah Sibanda VumaEvery Child is Your ChildMovement of Asylum Seekers in Ireland
Up Next