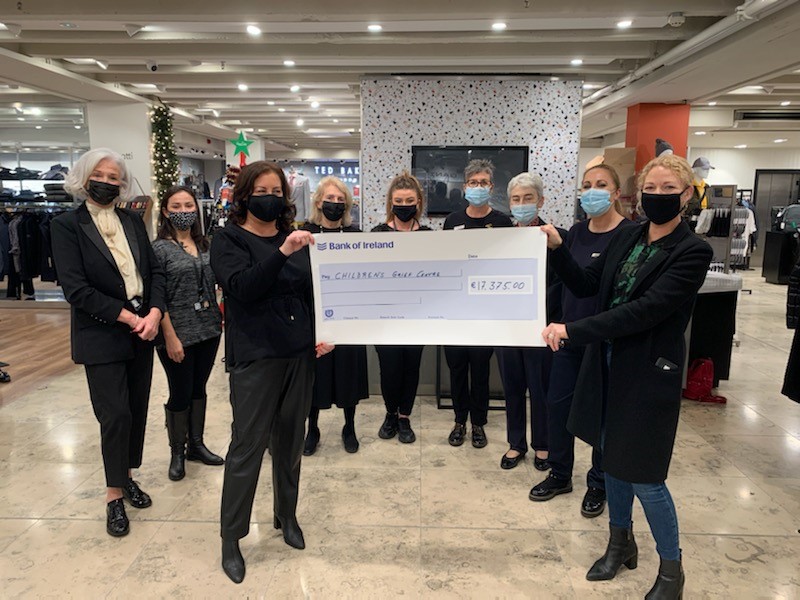 The Brown Thomas Childrens Grief Center partnership has seen a number of successful fundraising events by the staff from Brown Thomas in support of the Children’s Grief Centre over the past two years.

The centre supports children and young people affected by loss through death, seperation, or divorce.

The recent contribution of over €17k from Brown Thomas through their fundraising events will make a massive impact on the day-to-day running of the centre, which is volunteer-led.

Carol Fitz-Gough, Fundraising and Events Coordinator at the Centre said, “In a time where restrictions and store closures have had a huge impact on businesses, the staff in Brown Thomas Limerick continued to fundraise behind the scenes helping us to support children and young people who are grieving.  We are truly grateful for the support shown by the team and wish to thank Liam Dwan, General Manager, the Charity Committee, and all the Brown Thomas staff for their contribution and support of our work.”

The staff at Brown Thomas have been fundraising for the Children’s Grief Centre for some time, and have completed charity walks, a river cruise, and turned the iconic Brown Thomas window into a home for teddy bears as part of their ‘Gifting Bear’ campaign in 2019.

It's only natural that we try to protect children by sheilding them from death but children have the ability to understand far more than we think.

Telling them that someone has died and they won't be coming back allows them to understand what is going on. pic.twitter.com/qLaNz1BTRL

This campaign saw the children of the Brown Thomas Limerick staff donate teddy bears that they no longer needed, which were then displayed on the window front before being donated to the children who attend the Children’s Grief Centre. As well as this, the Brown Thomas staff held a bucket collection outside the store and the money raised went to both the Children’s Grief Centre and St Vincent De Paul Limerick.

“Brown Thomas has been a fantastic support to us over the past number of years and we really appreciate all they do for us,” Orla Ryan Fundraising Assistant for the Children’s Grief Centre said.

Much of the funds raised for the Children’s Grief Centre is going towards their Dream Build, which will have a child-centric design and a range of support rooms tailored to specific age groups’ needs. It will also have a small library extension into a memory garden for waiting parents to use, as well as support, training and administrative spaces needed to support the work of the Centre.

The Children’s Grief Centre was founded in 2009 by Sr Helen Culhane and has been providing support services for school-aged children and young people who have been affected by loss in the Midwest Region. These services allow children to express themselves through play, art, and offering a listening ear in a safe, and non-judgemental setting.