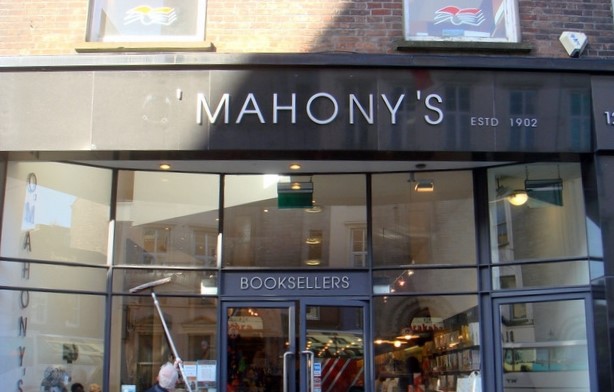 O’Mahonys booksellers located on O’Connell St. Limerick City has been proudly providing the city and county with exciting new releases since 1902 and this year proves no different. O Mahonys Booksellars hot new releases

Just last week local author, energist and holistic therapy teacher Ber Collins launched her first book ‘Every Mum has Magic Kisses’ in the O’Connell St, store and it displayed to be a huge success. ‘Every Mum has Magic Kisses’ is a true story of loss, hope, love and forgiveness derived from a troubled childhood filled with abuse and bullying. As she puts one foot infront of the other to ensure her kids have what she missed out on during her early years, her broken heart fills with love for them. This step by step guide for is mums everywhere – especially those who have had a less than idyllic childhood. This is a book to shine a little light on a path out of the darkness to help you be the mum your kids need you to be. ‘Every Mum has Magic Kisses’ will be available to purchase in store in early December.

Another red hot release coming to O’Mahonys this summer is the highly anticipated and latest instalment of the global Harry Potter franchise. Harry Potter and the Cursed Child Parts I and II by J.K Rowling will be available in store from the 31st of July and you can already tell from the buzz around this book that it’s going to be a bestseller. Based on an original new story by J.K. Rowling, Jack Thorne and John Tiffany, a new play by Jack Thorne, Harry Potter and the Cursed Child is the eighth story in the Harry Potter series and the first official Harry Potter story to be presented on stage. The play will receive its world premiere in London’s West End on 30th July 2016

And finally the long awaited and any rugby fans forte arrives in store on October 6th and it is none other than “The Battle” by Paul O’ Connell. Paul O’Connell was born in Limerick in 1979. He was selected for three British and Irish Lions tours, including as captain in 2009. He won three Six Nations championships with Ireland, including two as captain, in 2014 and 2015. He won two Heineken Cups with Munster. O’Connell became the most beloved and respected of the golden generation of Irish rugby players – and was widely regarded as one of the very best players in the world. There was nothing inevitable – or even likely – about any of this, and in an autobiography as intense and thoughtful as its author, O’Connell explores the forces and struggles that turned him into the player and leader that he became. The Battle is a book for everyone who wants to understand the roots of achievement and the inner world of an elite sportsman. It will take its place alongside the very finest sports books of recent years. This insightful autobiography depicts Paul’s life and career through his athletic devotion. This book is sure to be a sell-out and would be the ideal  present for any rugby-mad boyfriend, brother or dad so be sure to get your hands on yours by pre-ordering either in store or online now for just €19.99.
.