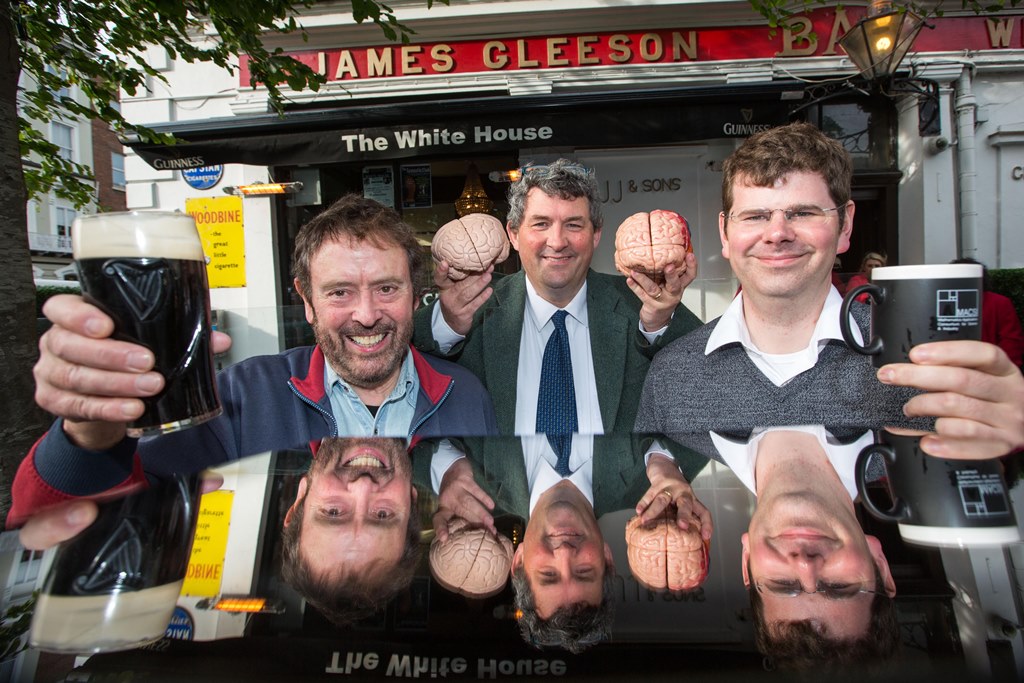 Pictured at the Pint of Science at the White House Bar are from left: Dr. Terry Mc Grail, ” Generating the Material Edge, “Prof. William O’Connor, “Brains R Us” and Dr. William Lee, Mathematics of Brewing Coffee”. Picture by Sean Curtin.

Visitors to the Locke Bar on Monday night and White House Bar on Tuesday night were thoroughly entertained with the subjects of health, science, technology, environment and maths while enjoying a drink this week.

Pictured at the Pint of Science at the White House Bar is Dr. Aoife Smith, “Bringing Maths Eyes to the Masses”.
Pic Sean Curtin.

Pint of Science took over the Locke with discussions not just about science but science in our society – well-known and renowned economist from UL, Stephen Kinsella who MC’d for the evening, also gave a talk on the contribution of health to the health of the Irish economy. Dr Kinsella left us pondering about whether the market will solve the problems of our health system or whether it is an issue for our government.  Kerry Hagan spoke about computers dreaming of electric music, Patrick Frawley informed us about the current research to enable pharmaceutical plants increase the production of drug manufacture, leading to more affordable drugs worldwide.   The evening conversation moved to contagion with James Gleeson who provided an engaging talk about biological and information contagions and their parallels. Finally Gabriella Avram and Laura Maye finished the evening with interactive museum technology. They are working on interactive installations in the Hunt Museum for visitors to experience in the near future.

Visitors to the White House Bar Pint of Science event were entertained by Billy O’ Connor presenting the science of the brain and how it is networked, William Lee described how mathematics is involved in brewing coffee, Terry McGrail demonstrated some cool composite materials and talked about their uses in plans, cars, buses and manhole covers. Aoife Smith amused the audience with her very witty maths quiz and she also described her “bringing maths eyes to the masses” project and Mike Hinchey demonstrated some cool space mission plans. Sibel Erduran Mc’d for the evening in the White House Bar, which was packed with Pint of Science enthusiasts.

Outside of Limerick, Pint of Science events are taking place in Dublin and Galway, and across the UK, France, Germany, Italy, Spain, USA and Australia.  Established in 2012 by Michael Motskin and Praveen Paul, two research scientists at Imperial College London, the event started by bringing together Researchers and people affected by Parkinson’s, Alzheimer’s, motor neurone disease and multiple sclerosis into their labs to show them the kind of research they do. It was inspirational for both visitors and researchers. They thought if people want to come into labs to meet scientists, why not bring the scientists out to the people.