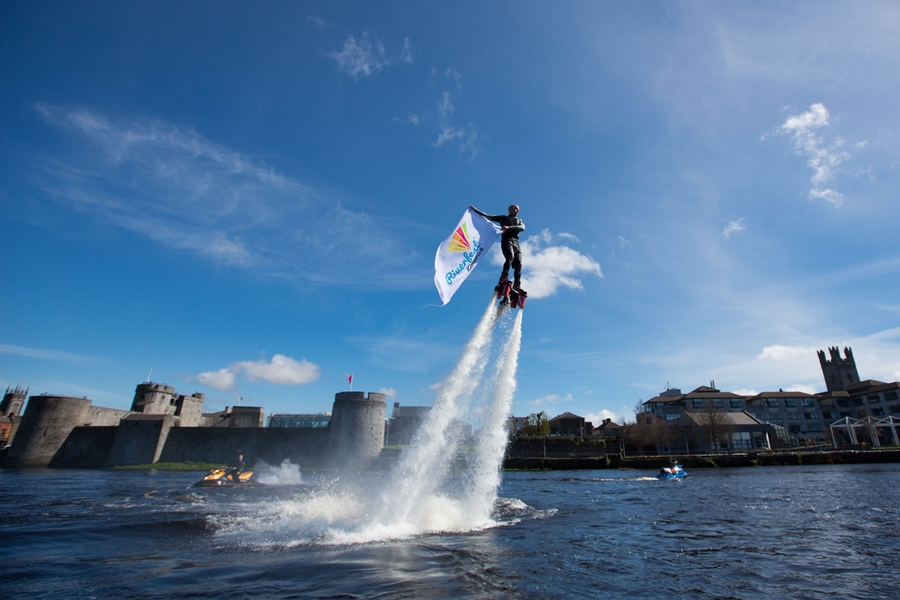 Food lovers and producers from around the Mid West Region and beyond will gather in Limerick City this May Bank Holiday Weekend 28 April-2 May for Riverfest 2016, Limerick’s hugely popular summer festival.

Food is one of the core ingredients of this year’s festival menu which also features spectacular performances by world champion wakeboarders and jetski champions as well as key waterfront events in a new Riverfestival Village in Arthur’s Quay Park.

12/4/16 REPRO FREE
Ken O’Connell, Riverfest Flyboarder takes to the River Shannon to give spectators a glimpse of what to expect at the launch at the Curragower.
Riverfest on the Shannon will feature action packed water based activities and events such as a sailing regatta, kayaking and performances from watersports stars like 2016 Ladies Flyboard champion Gemma Weston from New Zealand who will perform a number of shows for the first time in Ireland.
Picture Sean Curtin FusionShooters.

The Riverfestival Village will be a treat for all the family with food, craft and retail stalls and stunning vintage amusements set against the backdrop of the glistening River Shannon in Arthur’s Quay Park, running daily from 10am-10pm. Local food produce will be showcased in the picturesque continental market where food tastings will be offered to the estimated thousands of people passing through each day.

Meanwhile, the Riverfest 2016 BBQ Competition – Ireland’s largest barbecue cook-off – will be a feast for the senses on Saturday, April 30, at its new location at Honan’s Quay beside Arthur’s Quay Park. 50 teams will be competing for the honour of representing Ireland at the WBBQA European Championships in Germany.

“The strong food theme that exists throughout the Riverfest 2016 programme represents a celebration of Limerick’s local food producers and their produce,” said Cllr. Liam Galvin, Mayor of the City and County of Limerick, about the festival’s food offering.

He added, “There is a shared, community-wide passion for Limerick’s unique food produce and for the promotion of Limerick’s vibrant and prosperous local community, as evidenced by the recent launch of the Limerick Food Strategy. The Riverfest Village and the Barbeque Competition underline this passion and greatly enhance the overall visitor experience on offer in Limerick throughout this May Bank Holiday Weekend festival.”

Other highlights of the five-day festival include:

Riverfest on the Shannon will feature action packed water based activities and events such as a sailing regatta, kayaking and performances from watersports stars like 2016 Ladies Flyboard champion Gemma Weston from New Zealand who will perform a number of shows for the first time in Ireland. Ireland’s David O’Caoimh, the World Number 5 Wakeboarder, and the British Freestyle Jet Ski Championship winning team of Craig Halloway, Chris Ames and David Herridge on Saturday 30th April and Sunday 1st May

Fashion Friday which returns with fashion shows and best dressed competitions from the Holman Lee Agency in Arthur’s Quay Shopping Centre from 12.30-3.30pm on Friday April 29 The Riverfestival Village will be the perfect viewing point to watch the many water based events on Saturday April 30 & Sunday May 1 including a sailing regatta, sea scouts boat launch, and kayaking!

A spectacular fireworks display over the River Shannon will transform the skies of Limerick into an explosion of colour on Sunday May 1 10pm. The festival also features fantastic fringe events across the city including comedy, theatre, gigs, EVA International, Ireland’s biennial of contemporary art and markets!

The weekend will also see thousands of runners and walkers come to the city to participate in the Barrington’s Hospital Great Limerick Run which takes in many of the historical and scenic sights across Limerick, on Sunday May 1. Now the largest participation event outside of Dublin, the Run features entries from all 32 counties of Ireland and over 20 countries with musical acts from marching bands, gospel choirs, traditional music and DJs entertaining participants along the route of the marathon, half marathon and 10K event.

For more information on Riverfest 2016 check out the site here