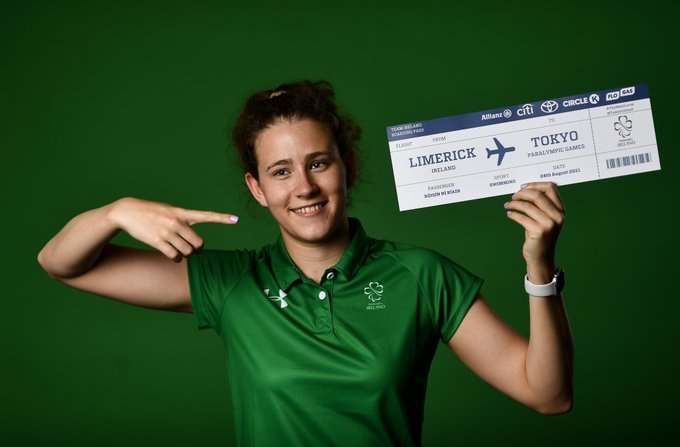 Roisin Ni Riain will be representing Ireland at the Summer Paralympics in Tokyo, which begins Tuesday, August 24.

This marked her fourth final of the Paralympic Games.

She got through to the final after finishing third in the SM13 200m individual medley heat.

In the heat, she finished third with a time of 4:45.14, which was enough to qualify her as the seventh fastest swimmer for the eight-person final.

Ni Riain set a new PB for the SB13 100m Backstroke in her second Paralympic final in 24hrs at the Tokyo Aquatics Centre on Thursday, August 26.

She qualified for the SB13 100m Backstroke final on Thursday when finishing in third place with a new PB of 1:09.23 in the heat.

The I Love Limerick crew would like to congratulate Róisín on her amazing performances!

Róisín reached the Minimum Qualifying Standard to compete in the Paralympics in April 2021.

Roisin Ni Riain, a 16-year-old from Drombanna, Limerick, is representing Ireland at the Summer Paralympics in Tokyo, which begins on Tuesday, August 24.

She is Ireland’s youngest athlete at the games and trains with Limerick Swimming Club.

In late 2020, she announced her arrival on the world stage with a series of impressive swims at the World Para Swimming Series in Italy. This year, she won bronze on her debut at the European Championship in May.

Róisín will be part of the five-person swimming squad, alongside Ellen Keane, Ailbhe Kelly, and Nicole Turner. Like Róisín, Turner was once the youngest member of Team Ireland, making her Paralympics debut in Beijing in 2008.

The Limerick teenager is visually impaired and has said that she has very poor peripheral vision and struggles reading the arrivals/departure board at an airport.

She received her international classification – exams to determine the extent of her vision impairment – last April to be eligible for selection for Tokyo.

Massive congrats to Róisín Ní Ríain & @paralympics_ireland in the World Para Swimming Series. Classified S13, reached the Minimum Qualifying Standard for #Tokyo2020 & a handful of medals. We are so proud of you! @swimireland @munsterswimming #limswimclub 🇮🇪🏊‍♀️🥇🥈🥉 pic.twitter.com/tla2bEqZZW

Róisín has 9 two-hour swim sessions a week, allowing herself to rest on Sundays.

When she’s not swimming, she enjoys music, having a level seven on piano, and watching medical and crime shows on TV.

Being the eldest of four girls, her family are extremely supportive of her efforts, particularly her parents, Seosamh and Marian.

Róisín attends the all-Irish secondary school Gaelcholáiste Luimnigh, where she recently finished Transition Year, and noted that the school has been quite supportive and understanding of her schedule.

For the Paralympics, Róisín’s priority is to focus on performance, and her goal is to make as many finals as possible.

The Summer Paralympic Games, similar to the Olympic Games, were supposed to take place in 2021 but were postponed due to Covid-19.

The Mayor of the City and County of Limerick, Cllr Daniel Butler, has extended his best wishes to the Limerick athlete and her 28 fellow team-mates who will be competing in the Paralympic Games in Tokyo.

Mayor Daniel Butler said: “I want to wish Róisín and her fellow athletes the very best of luck in the games. It is through her hard work and determination that Róisín is on the world stage. She is a superb ambassador for her community, her club, Limerick and Ireland – we are all so proud of you, our local Paralympian.”

“Her years of determination, training and dedication are now being rewarded and I know you will inspire the next generation of athletes in Limerick to fulfil their dreams of taking part in sport at the highest level.”

“The very best of luck at the Tokyo Games and we will all be cheering you on at home in Limerick as you take to the pool.”

The I Love Limerick crew wish Róisín the best of luck.

For more on the Paralympics go HERE

For more stories on the Olympics go HERE

Related Topics:paralympicsroisin ni riain
Up Next