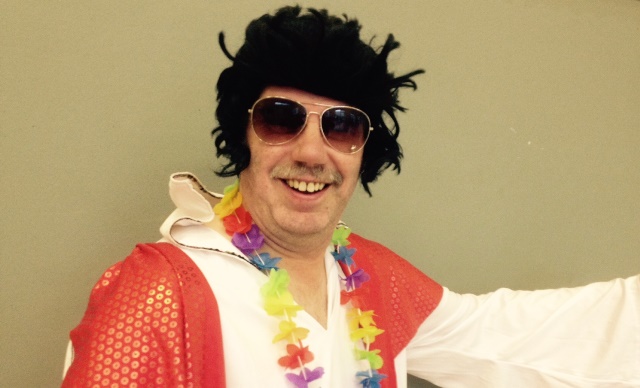 Christi Buster McNamara in costume for the Southill show. Picture by Karen Fitzgibbon.

The Southside Women’s Group embark on this unique collaboration with the Southill Men’s Shed as they come together for the World Premierre of ‘Southside Story’ for one night only! This great night of entertainment is beign held to celebrate the Southill Family Resource Centre’s 15th anniversary which takes place this year.

The Southill FRC based in 267 Avondale Court O’Malley Park have worked in the Southill area with residents and other local agencies in providing a range of family support services including a Complimentary Health Service with Incredible years and Strengthening Families parenting programmes. The centre also boasts QQI Quality Assurance which allows them the opportunity to provide accreditted as well as non-accredditted Educational and training courses. The two peer support groups, People with Disabilities and the Older Persons Support group have drafted their own script which follows the story of Johnny and Rubys troublesome love affair through music and song and King Kanut’s aftershave! Don’t miss this hilariously funny love story!

The show will take place on Wednesday December 2, 2015 at 8pm in the Lime tree Theatre. Tickets cost €5 and the running time of the play in 90 minutes including an interval. This project is supported by the LCETB adult education.

Director Karen Fitzgibbon said that the audience have a great show to look forward to: “The audience can expect a show filled with comedy, drama, a love affair likened to Romeo and Juliet story, colourful costumes, a handmade set built by the Southill men’s sheds and Musical choices rolling through the years.”

Karen added that the show is almost sold out which is very exciting for all of the cast and everyone involved: “The show is almost sold out. It holds a cast of 18, most of whom have never threaded the boards before. Wonderful comic moments, depicting life in Limerick in the early 70’s and key landmark references. Jimmy Prior is the motivation behind the project but the whole Southill community is involved in some way in this celebration and what’s even more amazing is the support from other Limerick communities who are buying up the tickets so quickly.”

Tickets are €5 and available here.