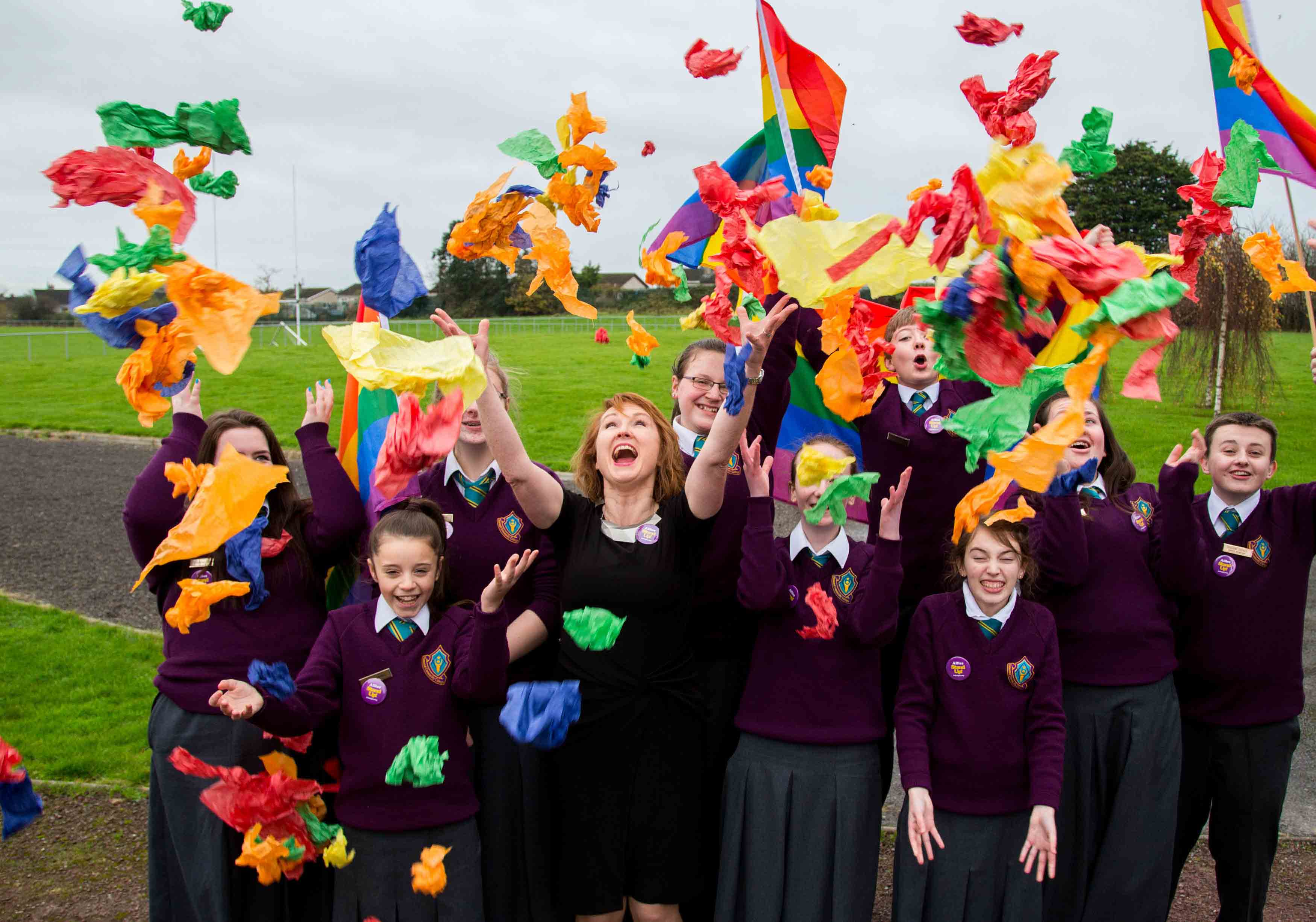 Stand Up week launch in Limerick on behalf of BeLonG To

The 7th Stand Up week launch in Limerick, in St Nessan’s Community College, was launched by Jan O’Sullivan, Minister for Education and Skills on behalf of  BeLonG To, Ireland’s national organisation for Lesbian, Gay, Bisexual and Transgender (LGBT) young people.

For the week of 23rd – 27th November 2015, BeLonG To has distributed Stand Up! packs to all second-level schools in the country and after the historic referendum win in May which marked a new openness in Irish people to talk about being LGBT, expects that more students and teachers will participate in the week than ever before.

BeLonG To’s Stand Up! week was identified as one of the key actions schools can take under the Government’s National Action Plan on Bullying.  Funded by the Department of Education and Skills, the National Office for Suicide Prevention (HSE) and the Department of Children and Youth Affairs, the campaign focuses on friendship and calls on young people across Ireland to support their LGBT friends.

Stand Up now reaches a quarter of all secondary schools, helping over 55,000 students, with an aim to increase this number each year.

Stand Up educational packs include information on homophobic and transphobic bullying for teachers and youth workers, especially regarding the mental health difficulties caused by such bullying. The packs also include lesson plans and posters.

Jan O’Sullivan, TD, Minister for Education and Skills said: ‘‘I am delighted to be launching Stand Up! awareness week today. The Department of Education and I are very supportive of Stand Up and we are deeply committed to tackling homophobia and transphobia bullying in our schools. I urge every post-primary school to take part in this important initiative. It continues to go from strength-to-strength each year and is a great campaign, with benefits for students and entire school communities.”

Moninne Griffith, Executive Director of BeLonG To, said: “Ireland changed what it means to grow up lesbian, gay bisexual or transgender in Ireland in May this year with a resounding yes in the marriage equality referendum. However we know from other countries where marriage equality has been introduced that homophobia and transphobia unfortunately do not disappear overnight. We have more work to do to make sure the support shown by Irish people to LGBT people in May’s referendum changes the actual daily experience in young LGBT people’s lives.”

Dr. Carol-Anne O’Brien, BeLonG To’s Director of Advocacy said, “Homophobic and transphobic bullying unfortunately are still problems for young people in schools and communities across Ireland. We know that this bullying is linked to mental health difficulties faced by lesbian, gay, bisexual and trans students.  We hope that Stand Up Awareness Week will tell LGBT young people that they are not alone, and they do not have to suffer or witness homophobic or transphobic bullying in their schools.”

For more information on Stand Up! Awareness Week against Homophobic and Transphobic Bullying, 23rd – 27th November, please visit the website, below.