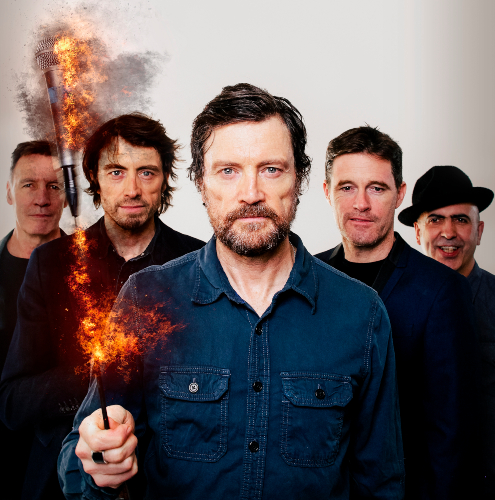 After a long hiatus from releasing new material, in 2017 the Stunning proved that they hadn’t lost the knack for writing hits: the single ‘Brighten Up My Life’ was one of the most played Irish songs on the radio that summer.

Dolans Presents have today announced that The Stunning will play Dolans Warehouse on 13th March 2020. The gig will tie in with the celebration of the 30th anniversary of the band’s classic album Paradise in the Picture House.

Paradise in the Picture House was the band’s debut album and features hits such as Brewing Up a Storm, Half Past Two, Got to Get Away and Romeo’s on Fire. It stayed at the top of the charts for five weeks upon its release in 1990 and catapulted the band to fame.

For the first time in almost 30 years, Paradise in the Picture House will be available on vinyl from December 2019 from the band’s website. The band’s reputation as a live act has gone from strength to strength – having headlined numerous festivals all over the country, the Stunning was called upon to close the show at both Féile 2018 and 2019 in Semple Stadium in Thurles.

After a long hiatus from releasing new material, in 2017 the Stunning proved that they hadn’t lost the knack for writing hits: the single ‘Brighten Up My Life’ was one of the most played Irish songs on the radio that summer.

They followed this with the release of ‘Twice Around The World’ – the first album by the band since 1994, it went straight to Number 1 upon its release on March 2018. Rave reviews and the fact that it contains some of the bands biggest hits (Everything that Rises, Heads Are Gonna Roll, She’s on My Mind &amp; Mr.Ginger) along with Brighten Up My Life helped it on its way to the top of the charts.

In between ‘Stunning’ duties, the band members have their fingers in many pies. Lead singer Steve Wall’s acting career is really taking off. Following his lead role performance in My Foolish Heart a feature film about legendary trumpet player Chet Baker, he’s recently filmed a new sci-fi series with Ridley Scott, completed an episode of Tin Star with Tim Roth and is currently filming The South Westerlies, a new drama series for RTE due out next year.

Guitarist Derek Murray tours with comedian Tommy Tiernan. Keyboards and trumpet player Jim Higgins is a much sought after musician in the trad scene and a stalwart in Christy Moore’s band.

Drummer Cormac Dunne plays with everybody west of the Shannon, sometimes twice a day! Joe Wall has been involved with the Music College BIMM Dublin since it opened in 2011. In his spare time he writes and records (and hatches plans for future Stunning ventures). Tickets for the Stunning Live at Dolans Warehouse go on sale this Friday at 9 am and can be purchased at Dolan’s.

For more information on upcoming gigs in Limerick click here.