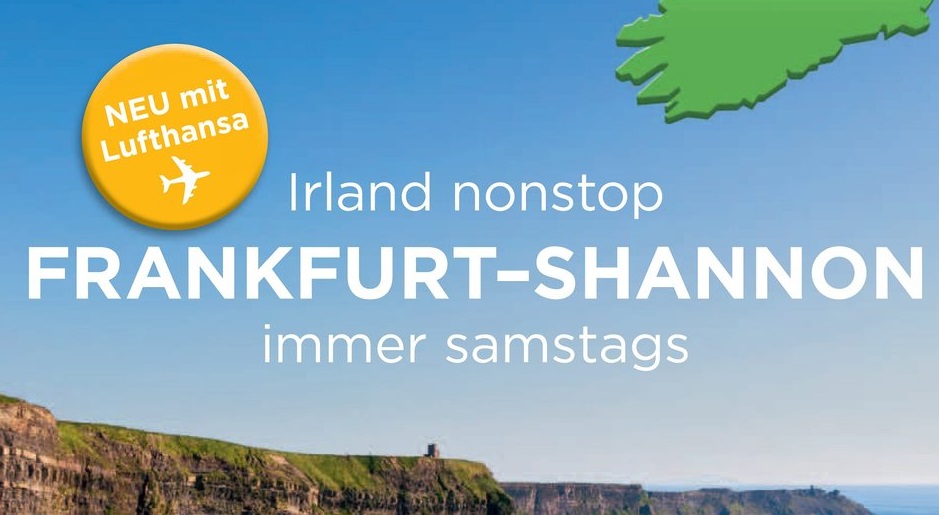 Tourism Ireland partners with Shannon Airport, to promote the new Lufthansa flight from Frankfurt and to grow German tourist numbers this summer. The campaign, which gets underway this week, is highlighting Shannon Airport as the gateway to the Wild Atlantic Way.

Working closely with airlines and airports to build demand for flights is a key priority for Tourism Ireland and this campaign will reach almost 300,000 Germans – through over 200 eye-catching ‘city light’ poster ads, as well as ads on info-screens in tube stations and S-Bahn (railway) stations, around the city of Frankfurt. The campaign also includes email marketing to a database of 60,000 potential visitors, directly them to a specially created section on Ireland.com. Tourism Ireland is also highlighting the new flight from Frankfurt, and holidays along the Wild Atlantic Way, to its 287,000 Facebook fans. 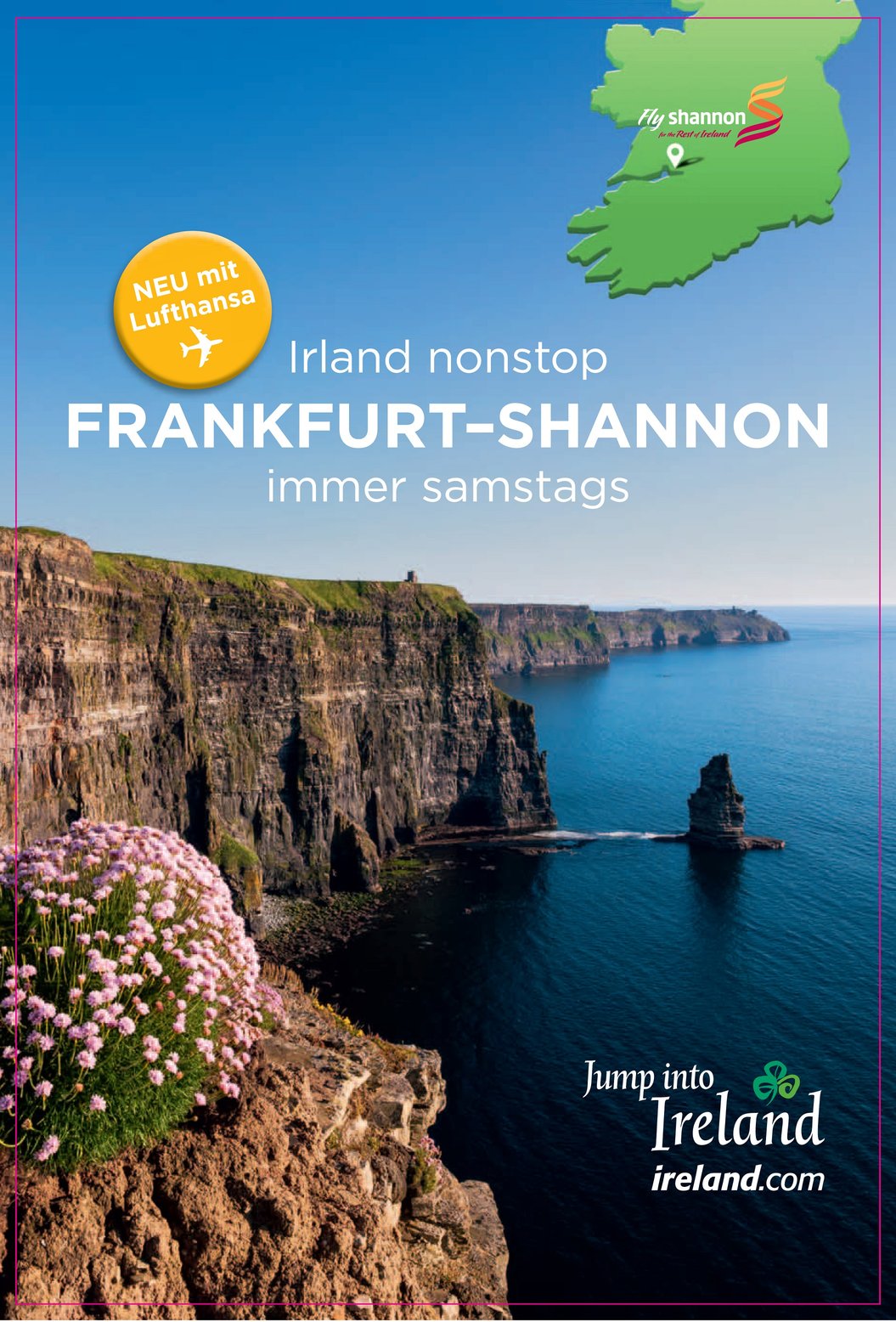 Tourism Ireland partners with Shannon Airport, to promote the new Lufthansa flight from Frankfurt and to grow German tourist numbers this summer.

With a holiday allowance of up to 30 days per year being the norm, holiday-taking is important for Germans and over half the population takes at least one holiday outside Germany each year, making it one of the largest outbound travel markets in the world. Germany is the third-largest source of visitors for Ireland and our most important non-English-speaking market. Travel to Ireland has grown significantly in the last six years, increasing from 399,000 German visitors in 2010 to a record 650,000 visitors in 2016 – an increase of +63% since 2010. The German market is worth almost €400 million annually to our economy and Irish tourism.

Zoë Redmond, Tourism Ireland’s Manager Central Europe, said: “We are delighted to partner with Shannon Airport, to highlight the new Lufthansa flight from Frankfurt and to help grow German tourist numbers this summer. This new service will certainly provide a welcome boost for tourism, expanding travel options for German holidaymakers wishing to visit the Wild Atlantic Way and the West of Ireland this summer. As an island, the importance of convenient, direct, non-stop flights cannot be overstated – they are absolutely critical to achieving growth in inbound tourism.

“2016 was the best year ever for German visitor numbers to Ireland, with 650,000 German visitors contributing almost €400 million to the Irish economy. Tourism Ireland is undertaking an extensive programme of promotional activity once again throughout 2017. We continue to work closely with our tourism partners, including Shannon Airport, to build on the growth of the past few years.”

Tourism Ireland has set its sights on continued growth for 2017 and is rolling out a busy programme of promotions throughout the year. The programme kicked off with a nationwide TV campaign this spring when ads for Ireland were seen by almost 16 million people across Germany. The activity also includes extensive e-marketing and social media, as well as trade and consumer promotions with Irish tourism partners; and, almost 200 influential German travel and lifestyle journalists have been invited to visit Ireland in 2017, to write or broadcast about their experiences here.

As well as Tourism Ireland’s marketing efforts, factors working in our favour include strong air connectivity, with 25,000 seats per week now available from German airports to the island of Ireland during the summer months; and, interest in visiting Ireland remains high among German travellers, who are seeking to discover the ‘real’ Ireland. Our coastline is a particular motivator for German holidaymakers; they like our unspoilt natural scenery, walking and exploring new sites.

To read more about tourism in Limerick click here