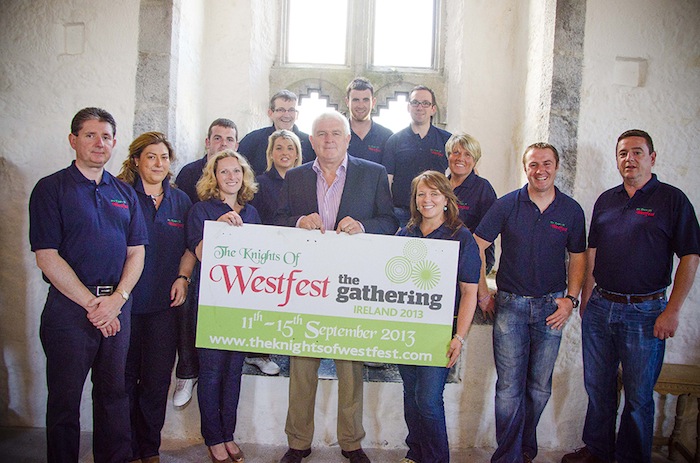 The Knights of Westfest Festival is very proud to present its biggest and best programme ever! Newcastle West becomes entertainment central for five action-packed days from the 11th -15th September 2013. A fun filled programme ensures something for everyone including top international headliners, a gourmet food fair, kidzone and street entertainment from all over the country. Over the past year, organisers have searched the globe, and enticed the cream of musicians into Newcastle West for 5 days of top class entertainment this year.

The 2013 programme includes top USA band Boyce Avenue,an American rock band formed in Sarasota, Florida, by the brothers Alejandro, Daniel, Arniel Stoneslow and Fabian Manzano who will be headlining Westfest on Saturday 14th September. After a hugely successful run of touring, which saw the band play some of the biggest venues in the United States, Canada, Australia, Europe and the United Kingdom, Boyce Avenue are back with Westfest their first live concert of the 2013 european tour. The band is excited to get a chance to play for their fans in these markets who haven’t yet had the chance to come to a concert previously.

This year Westfest & Newcastle West are teaming up with The Gathering and flying home Joan Teskey McCrae who won  “Bring em back for the Craic” a competition ran in March of this year, offering one person a chance to come home to Newcastle West and reunite with family and friends. Joan left home in 1983 for Scotland and in 1996 she immigrated and has been living in Virgina USA with her husband and family since.

Staying with the theme of reuniting, organisers are holding “The Olympic Ballroom Reunion” which will take place in The Courtenay Lodge Hotel on Friday September 6th. The Olympic was the beating heart of town’s social scene during the showband era and holds very special memories for dance partners all over Limerick . Music on the night will be provided by the famous showband The Indians and who knows the committee may even throw in “The Clubmilk” on the night aswell.

The Knights of Westfest are delighted to have such great support from the businesses and local people of West limerick and beyond, Siobhan Kelly, Programme Director for Westfest said; “The Festival is growing from strength to strength each year , and becoming one of the finest festivals across the country. We are thrilled once again to have such great support from everyone that drives the festival into it’s third year ,The buzz around is great and it’s a huge weekend of entertainment for both young and old!”

The organisers have announced a hugely impressive line-up for this year including the popular Taste of Westfest. The culinary 2 day event takes place on Saturday 14th and Sunday 15th September in the community centre Newcastle West and will introduce a range of gastro delights to visitors showcasing the finest food and craft. A jazz band will perform on the green  while everyone wines and dines surrounded by the aromas of all the stands shaping it up to be a fantastic event.