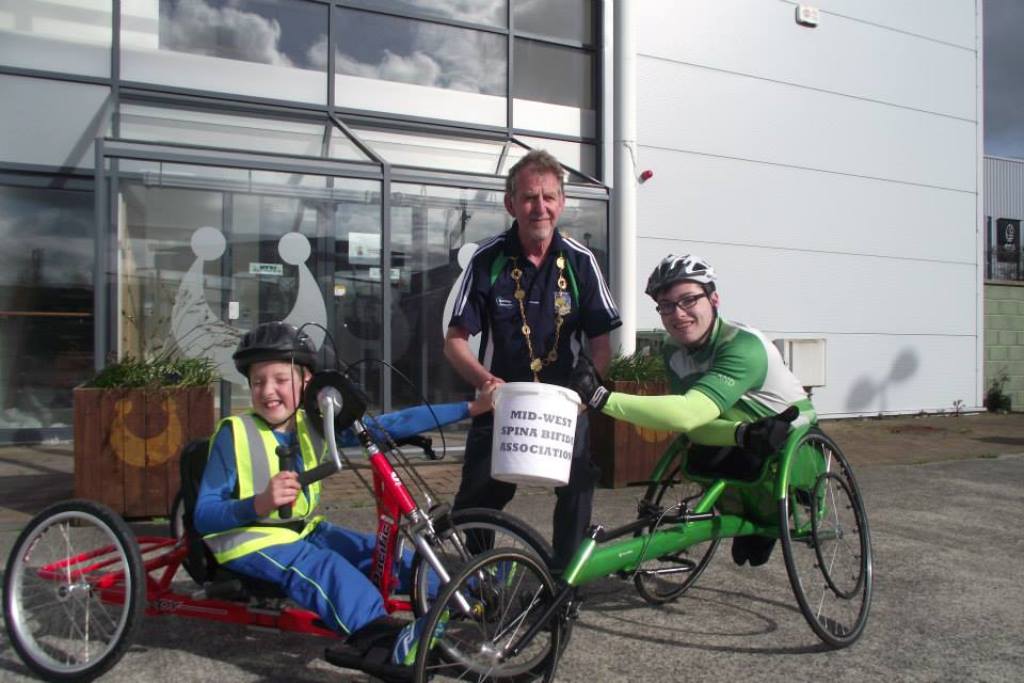 Life is all about challenges but some of us face more challenges than others. Sean Byrnes, 10 years old and Cillian Dunne, 18 years old from Terryglass are a great two examples of how to excel at overcoming them.

Both of these boys were born with Spina Bifida and Hydrocephalus and each one has been an inspiration to others by excelling in sports and in other areas ever since. They will both be racing at the 10km/ 6 mile race on Sunday in the Barrington’s Hospital Great Limerick Run.

Sean has always had a great determined spirit and is an inspiration to all who meet him. Having already achieved so much including completing a PADI Scuba Diving course in June 2014 and was issued his international PADI licences.

A very keen Swimmer Sean plays Wheelchair Basketball in St Colm’s Basketball Club, Limerick. On Sunday 18 April while competing in the Final Junior Blitz in the Irish Wheelchair Association, Clontarf, Dublin Sean was awarded by the (IWA) Young Player of the year 2015.

Sean faces his biggest challenge to date to raise awareness of Spinabifida & Hydrocephalus and much needed funds for the Mid West Spinabifida Association, Limerick. Sean has set his sights upon completing the 10k  in the Great Limerick Run on his hand propelled Trike.

Mayor Cllr Michael Sheahan, was on hand to wish the two athletes best of luck as he too will be taking part on behalf of the Mid west Spina Bifida Association on Sunday the 3rd of May next. Mayor Sheahan has also committed to participating in a tandem skydive on behalf of the charity before his year as mayor is finished in June. So this weekend’s exploits at the Great Limerick Run will be just the start of the fun for the first citizen of Limerick. ‘I’m delighted to help out this amazing charity and am excited to be a part of the great Limerick Run as a participant this year’ he said.

Cillian is another fine sportsman and this year will be his second time doing the 10k in the Great Limerick Run. He has a long record at competing and  representing his country and Mid West Spina Bifida in the World championships in Holland on the Junior Paraolympian team in July of 2015. He attends Borrisokane Community College and is a one to watch in the future.

“We have over 30 people running or cycling the race on behalf of the charity and we would like to wish everyone a wonderful experience. We are espiecially proud of our young athletes Sean and Cillian who are in inspiration to so many others. We’d like to thank the Mayor also for all of his hard work fundraising for us through the last few months also,” said Michelle Daly Hayes, Development Manager at Mid West Spina Bifida.

Im Voting Yes Ask me Why? Campaign holds discussion on why people will be voting Yes on May 22