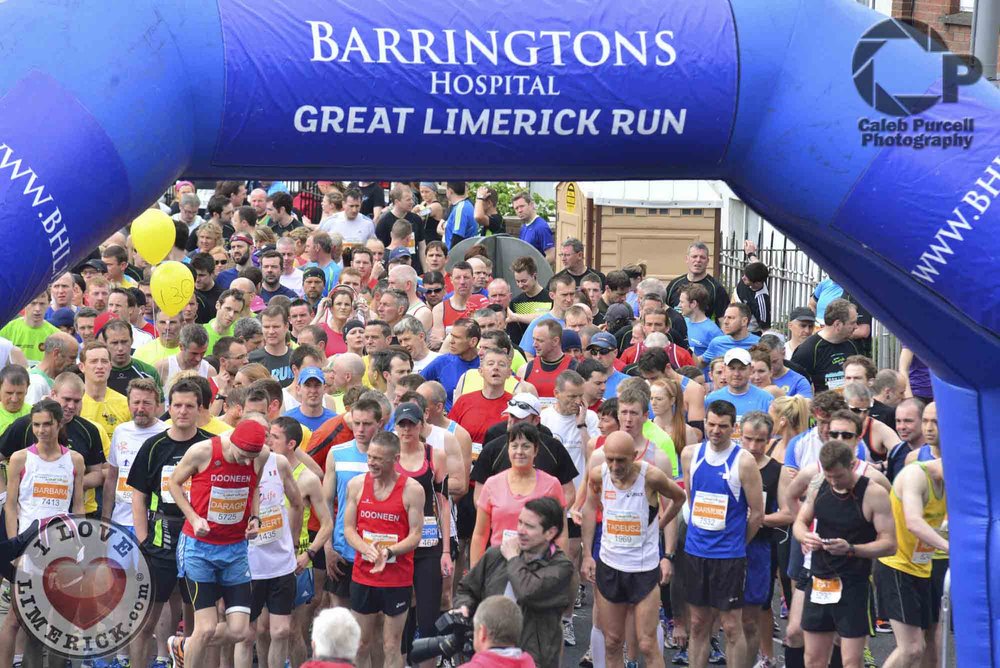 One of Ireland’s largest mass participatory events, The Barringtons Hospital Great Limerick Run is estimated to deliver a welcome €4.5m boost to the local economy.

The organisers of the 6th annual Barrington’s Hospital Great Limerick Run exceeded last year’s participant numbers of 12,200 which are partly explained by the early bird registration discounts that ended on February 6 last.

The hugely popular run on Sunday, May 3 – the Bank Holiday weekend – and during Riverfest celebrations continues to draw more and more participants each year for the popular 10km race, which starts at 1.30pm in Pery Square,  the half marathon, starting at 11.45am, and the full marathon at 9am.

Over the last three months, the Great Limerick Run team visited companies, schools and shopping centres throughout Limerick, as part of their overall promotional campaign to encourage people to get active and set them self a personal goal or challenge.

Since the inaugural race in 2010, over 41,000 people have crossed the finish line, raising €1.1 million for various charities while simultaneously contributing €10 million to local and regional business.

Family members of the late Aaron O’Flaherty, aged nine, hoped that many runners would sign up with them this May to raise funds for hospitals which helped him in his final days.

Aaron, from Castletroy View, died tragically in May 2014 at Temple Street Children’s Hospital in Dublin after an accident at the Blackhead Lighthouse, Co. Clare.

Some 20 friends and members of his family took part in the run, to raise funds for Galway University Hospital, where he was initially airlifted to, and Temple Street hospital in Dublin, where the boy with the “irrespressible smile” sadly passed away.

This year’s UL Sport Kids Run 2015 took place in the University of Limerick on Saturday, May 2, the day before the big races,  in Aaron’s memory.

“Aaron really enjoyed the Kids Run in 2013 and his medal took pride of place in our home, “ said his mum Cecilia, who is a Civil Defence officer.

The run is now the largest mass participatory event outside of Dublin and the only annual ‘Tier One’ event in the Mid-West region.

Race Director, John Cleary stated that there are many reasons for the continued success of the event.

“We have to acknowledge the huge levels of support from the people of Limerick and beyond who have demonstrated that the Barrington’s Hospital Great Limerick Run is now firmly established on the Irish sporting calendar,” he said.

“The public private partnership model has allowed us as race organisers to deliver a world class event to Limerick with an economic value in excess of €4 million to the local economy according to the latest Council Economic impact report.

The support and commitment of Barrington’s Hospital as title sponsor along with Limerick City & County Council and other commercial sponsors including sports apparel company Brooks UK & Ireland reflects the confidence that all stakeholders and partners have in the future growth potential of the event.

“We are proud to continue our title sponsorship of an event that promotes Limerick in a positive manner on a national and international scale,” he added.

Since the inaugural race in 2010, over 41,000 people have crossed the finish line raising €1.1 million for various charities while simultaneously contributing €10 million to local and regional business.

Interesting statistics on the Barrington’s Hospital Great Limerick Run to date include:

In anticipation of the demand for places in the children’s ‘UL Sport Run for Fun’ which takes place in the University of Limerick on Saturday 2nd  May, capacity has been increased to accommodate 3,000 children.  This event has to date raised over €50,000 for those primary schools with participating children.

A new ‘App’ for the event will be launched shortly that will contain useful advice on training programmes, nutritional advice along with information on various local services for those visiting Limerick over the May Bank Holiday weekend.

For full details on how to enter the Barrington’s Hospital Great Limerick Run please visit their site here. You can follow them on Twitter here and like them on Facebook here
You can read about last years run here.

Pictures by Billy Butler for I Love Limerick 2015. All Rights Reserved.

Pictures by Bryan Hayes for I Love Limerick 2015. All Right Reserved.