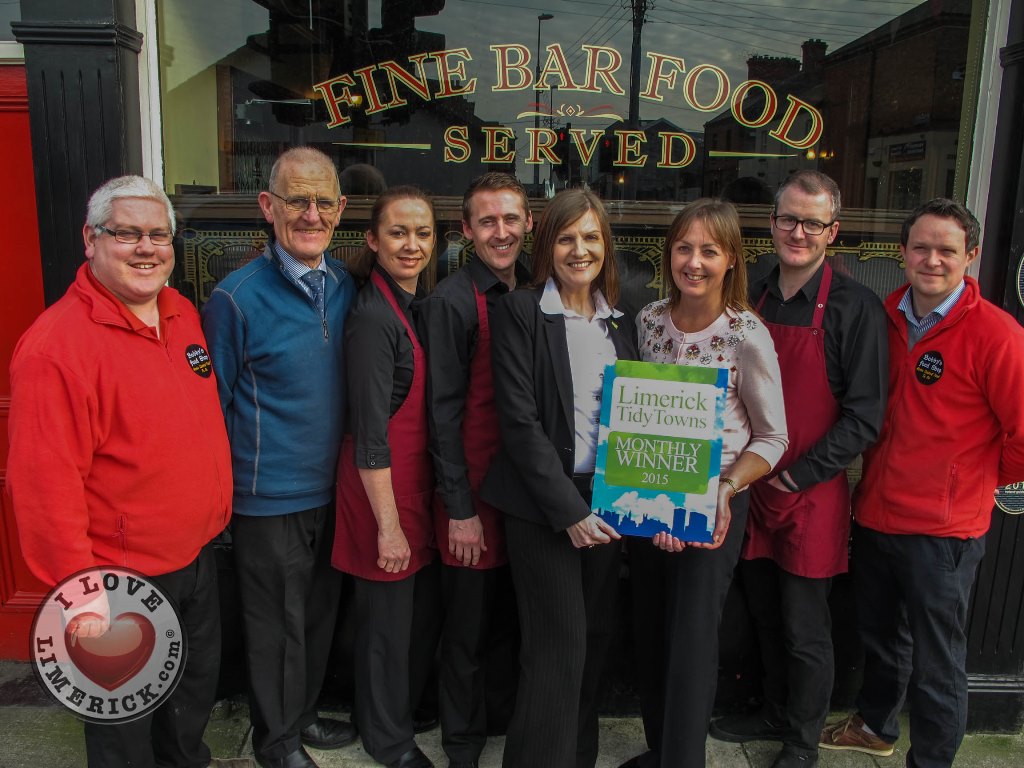 The Limerick Tidy Towns team were delighted to present their monthly award for March to one of Limerick’s best known and most popular venues, Bobby Byrne’s Gastropub and food shop on the corner of O’Connell Avenue and Wolfe Tone Street.

Maura O’Neill of Limerick Tidy Towns says, “Bobby Byrnes has long been a favourite of both the Limerick Tidy Towns team and also the South Limerick City Residents Association who do such sterling work in the area, due to its beautifully maintained exterior and traditional signage which perfectly reflects the pub’s charm and character. This is also complemented by Bobby’s Food Shop next door since its rebranding and overhaul in December 2013 which has transformed it into a highly attractive retail unit, in keeping with its reputation for the quality of its food. It is also clear that Bobby’s team take great pride in ensuring the exterior of both the pub and shop are kept impeccably clean and as such, they are most deserving winners of our March award.”

Bobby Byrne’s or simply “Bobby’s” to the locals was first established in 1963 and as such is steeped in history and full of character, both inside and out. Its popularity not just with Limerick natives but also with visitors to the city is understandable, and it has won numerous awards and been recognised for the quality of its food and the warmth of its welcome.  The pub serves breakfast, lunch and dinner 7 days a week and the food shop has a wide range of high quality produce from local suppliers, as well as a substantial range of “Bobby’s To Go” soups, brown bread, mains, sides and desserts, along with its ever expanding catering business. The two together create a perfect “foodie corner” in this part of the city, and the pub also carries a wide range of craft beer which can be enjoyed during one if its regular traditional Irish music sessions. For more information, you can visit their website here, call them on 061 316949 or simply call in any time.

Bobby Byrne’s is the third recipient of Limerick Tidy Towns’ monthly awards for 2015, with The Stormy Teacup having won in January and Thomas Street Framing Centre in February. An overall winner will also be chosen at the end of the year and previous winners from 2014 are eligible to win again in 2015 simply by keeping up the good work.

The overall winner for 2014 has been chosen and Limerick Tidy Towns apologise for the delay in announcing the result, but the team have been heavily involved in the Team Limerick Clean-up event scheduled for Good Friday, so have postponed the announcement of the 2014 overall award until after this has taken place. Needless to say, the entire Limerick Tidy Towns team will be taking part in TLC on April 3 and they encourage everyone to join in what promises to be a wonderful event and a day that will long live in the memory as people from all over the city and county unite in their pride in Limerick. Please visit the TLC website here for more information.

If you wish to volunteer with Limerick Tidy Towns, they meet every Sunday morning at 11 am at the corner of Thomas Street and O’Connell Street, and on Wednesday evenings from springtime onwards. For more information on the Limerick Tidy Towns, visit their website here, or e-mail them at [email protected]. You can also check out Limerick Tidy Towns on their Facebook page here, and their Twitter here. Read more about the Tidy Towns here.