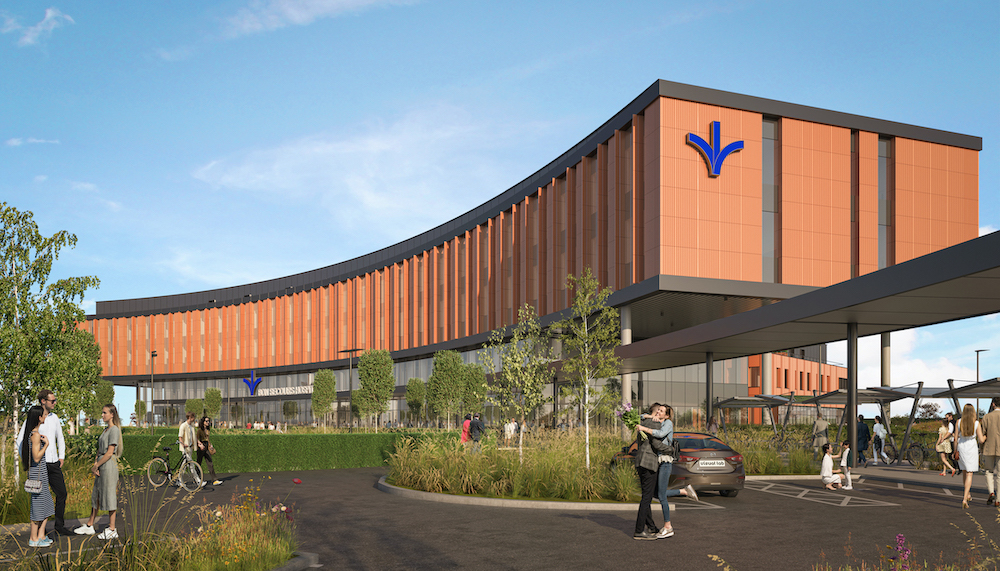 Bon Secours Health System (BSHS) is delighted to announce that it has reached a key milestone in its development of the Mid-West region’s first large-scale private hospital with the granting of planning permission by Limerick City and County Council for the project at Ballysimon on Limerick’s east side.

Having passed this critical juncture, BSHS – the country’s largest private hospital operator – will now proceed with immediate effect to detail design stage, with tendering for a construction partner to commence shortly and work on the Bon Secours Hospital Ballysimon site in January of next year.

The €150 million facility will be the single biggest investment in medical care in Limerick in recent years, addressing a significant medical services need, with the Mid-West the only region in Ireland with no private hospital at this scale. The commitment will also see specialities currently delivered at Bon Secours Hospital Limerick at George’s Quay expanded, to include a medical assessment unit, cardiology and other medical services. These services, together with the patient centric approach and stunning design, will significantly enhance accessibility to world-class private healthcare in the Mid-West region.

The new capacity at the seven acre site, which is part of the wider Kirkland Development master-planned complex at Ballysimon, will result in a doubling of patient numbers per annum from existing levels at the Bon Secours George’s Quay site to 45,000 ‘patient discharges’.  Employment levels will also double to 500 staff and consultants, with a significant recruitment programme to be undertaken, including targeting of medical care diaspora.

Bill Maher, Group CEO, BSHS said: “Earlier this year we launched our €300million investment strategy to 2025 and 50 percent of this will be committed to our new Limerick Hospital. That’s the significance of this investment for Bon Secours Health System in Ireland and our team in Limerick has made a compelling case from the outset for it.  We’re looking forward now to delivering on this opportunity for the Mid-West and for Bon Secours to continue its high-quality care mission.”

Jason Kenny, CEO of Bon Secours Limerick said:  “This is a really exciting moment as we now have the green light for a project that we have been building towards for three years. We have been on a great journey so far since we took over the former Barringtons hospital on George’s Quay and have doubled staff and patient numbers there. But due to site restrictions there, we are developing this state-of-the-art new hospital at Ballysimon in order to meet the needs of the region.  Patients will receive the highest standards of medical care synonymous with the Bon Secours but also in a hospital setting that will set new standards in terms of comfort, accessibility and sustainability.”

Mr Kenny added: “We would not have arrived at this juncture without the support of our staff, medical partners such as our consultants and GPs and, indeed, patients across the Mid-West region.  It’s been a collective approach from day one here and we’re going to continue working in that spirit of partnership towards a special moment in 2025 when we open a pioneering new private hospital for the Mid-West.”

Dr Siobhán Grimes, Clinical Director, Bon Secours Limerick said: “This is a very exciting development for the doctors and patients of the Mid-West region.  The new Bon Secours hospital will raise the quality and scope of medicine in the Limerick area to unprecedented levels. Clinicians across our region understand the need for greater access and innovation in medical care and this new state-of-the-art hospital on the Ballysimon Road will do exactly that.”

Denis O’Sullivan, Group Director of Capital Projects, Bon Secours Health System. “We’re delighted to have received planning permission from Limerick City and County Council for this new hospital here in Ballysimon. Our team has put a huge amount of work to get this very important investment for Limerick, the Mid-West and Bons Secours across the line and planning permission is a huge moment in the journey. We’re now looking forward to commencing procurement to appoint a construction partner with a view to starting work in January of next year.”

Rudi Butler of Kirkland Investments Ltd. said, “We are delighted that the Bon Secours Health System has chosen Towlerton Ballysimon as their preferred location for their New Limerick Hospital and it’s great news that they have now been granted full planning permission.  The announcement is without doubt, a strengthening of Limerick’s profile and indeed the wider Mid-West Region. It will also form a very important part of the overall development plans which Kirkland have for the Towlerton Lands which comprises of 62 acres in total including the Bon Secours Hospital site.”

BSHS is the largest private hospital operator in the country, with 4,000 people delivering care.  The group has hospitals in Dublin (Glasnevin), Tralee, Cork and Galway.  In 2017, it acquired the 200-year-old Limerick city centre hospital Barringtons.  The acquisition put further impetus into Barringtons’ rejuvenation and ambitious growth plans saw an additional €4m investment by BSHS, bringing new services and improvements to the facility including its operating theatres. Having delivered on a five-year vision, Barringtons has grown considerably and now has capacity constraints in the current hospital with a limited 0.4-acre city-centre site. The plan for the new hospital addresses this and adds further much-needed services for Limerick.