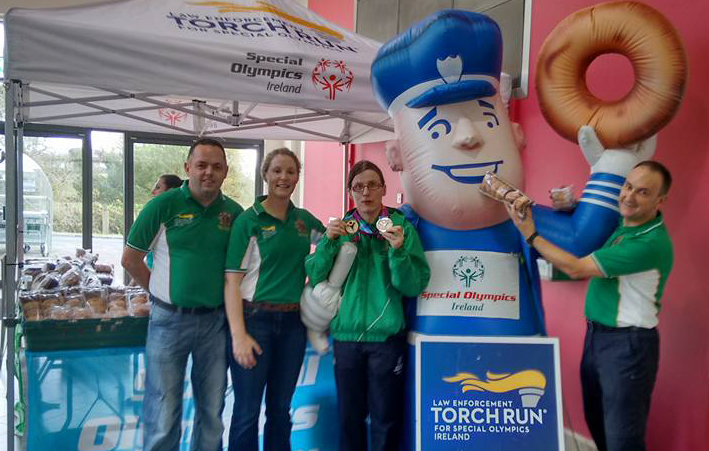 Limerick’s double bronze medal-winning Special Olympic athlete Ashleigh O’ Hagan will be at the Crescent Shopping Centre this Saturday, November 28, to lend a hand to the quirky Cops and Donuts Special Olympics fundraiser.

The Cops and Donuts Special Olympics fundraiser will take place from 10am to 3pm where Limerick Gardaí will erect a custom-made stand where more than 2000 delicious donuts will be sold to the public by local Gardaí, Special Olympics athletes and volunteers. The donuts cost €1 each. All proceeds will go to Special Olympics.

Ashleigh was the only Limerick athlete to represent Team Ireland at the World Games in LA last July. She won two bronze medals for gymnastics.

In total, the 88 athletes who traveled to the US brought home 82 medals, amassing 26 gold, 28 silver and 28 bronze medals. The World Games was the largest sporting and humanitarian event anywhere in the world this year.

The delicious donuts are supplied free of charge by Limerick Frozen Foods and Complete Cuisine.

The propose of the ‘Cops and Donuts’  initiative, which originated in the United States, is to raise funds and awareness for Special Olympics and it has now become a worldwide brand.

Garda Paul Howard said: “Roxboro Road Community Policing Unit are delighted to organise this fun and worthwhile event to raise much needed funds for Special Olympics Ireland, we would also like to thank local companies Limerick Frozen Foods and Complete Cuisine who generously donated these delicious donuts for the event’’

Lynda Foley, Regional Funding Coordinator with Special Olympics Munster said: “The Cops on Donut Shops are a fun and tasty way to raise much-needed funds for the Special Olympics. We are extremely grateful to An Garda Síochana, whose support for Special Olympics is invaluable and we can’t wait to see Ashleigh’s medals on the day.”

The Gardaí have also joined forces with Special Olympics to call on people to get freezin’ for a reason this winter by taking the plunge into the icy waters of Lough Derg. The Polar Plunge will take place on December 12th at the Killaloe Adventure where members of the public are encouraged to take part to raise thousands of euros for Special Olympics athletes.

Purple Up event against domestic violence