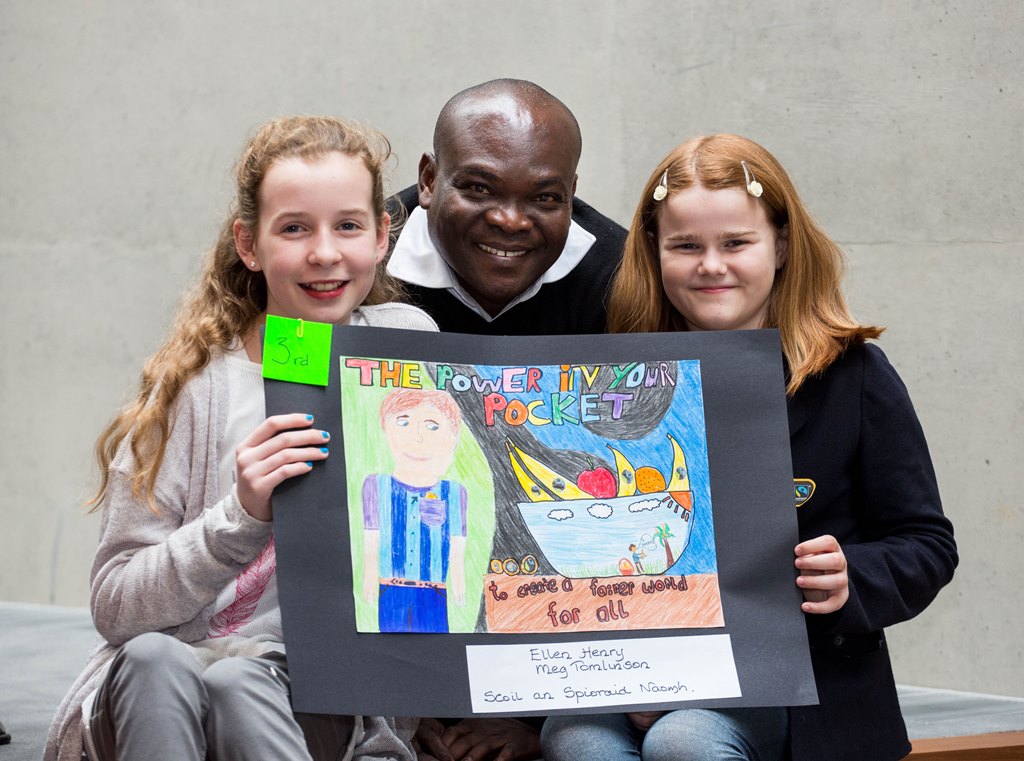 The Chairperson of Fairtrade Africa, the network representing 860,000 Fairtrade certified producers in Africa, was among the special guests in attendance at the launch of Fairtrade Fortnight in Limerick yesterday.

Chief Adam Tampuri from Ghana joined Fairtrade supporters from across Limerick and Ireland for the launch of the annual initiative, which features a programme of talks and community events aimed at promoting awareness of Fairtrade and Fairtrade-certified products.

There are over 1.4 million producers, farmers and workers spread across more than 70 countries in the world participating in Fairtrade. Limerick City is this year celebrating its 10th anniversary as a Fairtrade City having been awarded the status in 2005 as a result of the concerted efforts by local people to ensure that Fairtrade produce was made widely available.

The Limerick Fairtrade City Committee, supported by the Environment Section of Limerick City and County Council, is hosting a number of Fairtrade Fortnight 2015 events and activities highlighting the good work and challenges faced by Fairtrade producers, farmers and supporters. The programme commenced yesterday evening with a lecture on development education by Dr. Brendan O’Keeffe of Mary Immaculate College’s Geography Department. The event at Mary I was followed by a celebration of the College’s 5th Fairtrade anniversary.

Today, a Fairtrade Committee of students from Laurel Hill Secondary School and Laurel Hill Coláiste hosted a display of crafts from the Philippines and Brazil in Laurel Hill. Our Lady of Lourdes Parish will host a Coffee Morning in Garryglass House from 11am to midday tomorrow, on Thursday 26 February.

On Monday 2 March, Mary Immaculate College’s One World Society will create a cardboard tree using Fairtrade teabags as leaves, which students will be encouraged to take home.  The Sit n Sip Café at Our Lady of Lourdes Community Centre in Rosbrien will host a Blind Tea and Coffee Tasting Challenge between midday and 2pm on Tuesday 3 March.

Speaking at the launch event in Dooradoyle, Mayor Michael Sheahan, Metropolitan District of Limerick said: “I wish to congratulate the Limerick Fairtrade City Committee for their terrific efforts on behalf of producers in developing countries, as well as acknowledge the Committee’s continued engagement with the wider public. The Poster Competition is a good example of this and serves to teach our younger people a very important lesson about the importance of supporting Fairtrade producers.”

“As important as it is to teach our children about eating healthy food, I think it is equally important that they be taught about where the food is sourced and who produces it. Our children are our future. By teaching them well they will lead the way for the next generation. Children nowadays are more worldly wise than previous generations and I have huge confidence in their capacity to embrace the Fairtrade ideal,” he added.

“The theme of this year’s Fairtrade Fortnight – ‘’Power in your Pocket’ – highlights the power of consumers to instigate change,” said Dolores O’Meara, Chairperson of the Limerick Fairtrade City Committee.

“Surveys have shown that the majority of people recognise the Fairtrade symbol. Our next step is to put some Fairtrade items in the shopping basket.  We have the power in our pockets to change lives. We can support farmers and workers in developing countries who are trading their way out of poverty.  We can do it one purchase at a time,” added Ms. O’Meara.

Speaking at today’s launch Chief Adam Tampuri, who is also a serving board member of Fairtrade International, outlined the success and benefits of the Fairtrade movement in West Africa where 70% of the world’s supply of cocoa is produced.

“In my home country of Ghana, Fairtrade brings together farmers and producer organisations from small communities across the country. In these communities, which are some of the most deprived in my country, Fairtrade premiums have led to the construction of new schools and clinics and the establishing of cooperatives that finance women seeking to develop small businesses within their communities,” stated Chief Tampuri.

“Here in Ireland, we consume about 5 million bananas every week. Unfortunately, only one in 12 bananas is Fairtrade Certified. One of the actions for our campaign is to send a message to the retailers by using a specially designed banana postcard, available on their website here, which you can drop into your local store. You can also order your free Fairtrade Fortnight pack, which includes a selection of posters, postcards and the banana fact sheet on our website,” she added.

Fairtrade Fortnight 2015 continues until March 8. For more information on Fairtrade, you can check out their website here. You can also check them out on their Facebook page here and their Twitter here.

The theme this year is ‘The Power in Your Pocket’.

There are over 1.4 million farmers and workers spread across more than 70 countries in the world participating in Fairtrade.  Many of them work on holdings of a couple of acres.  Fairtrade enables them to provide for themselves and their families. You have the power to support them to build better futures for themselves and to improve working conditions around the world. You can support them one purchase at a time.

Have a fun night and bring your friends!