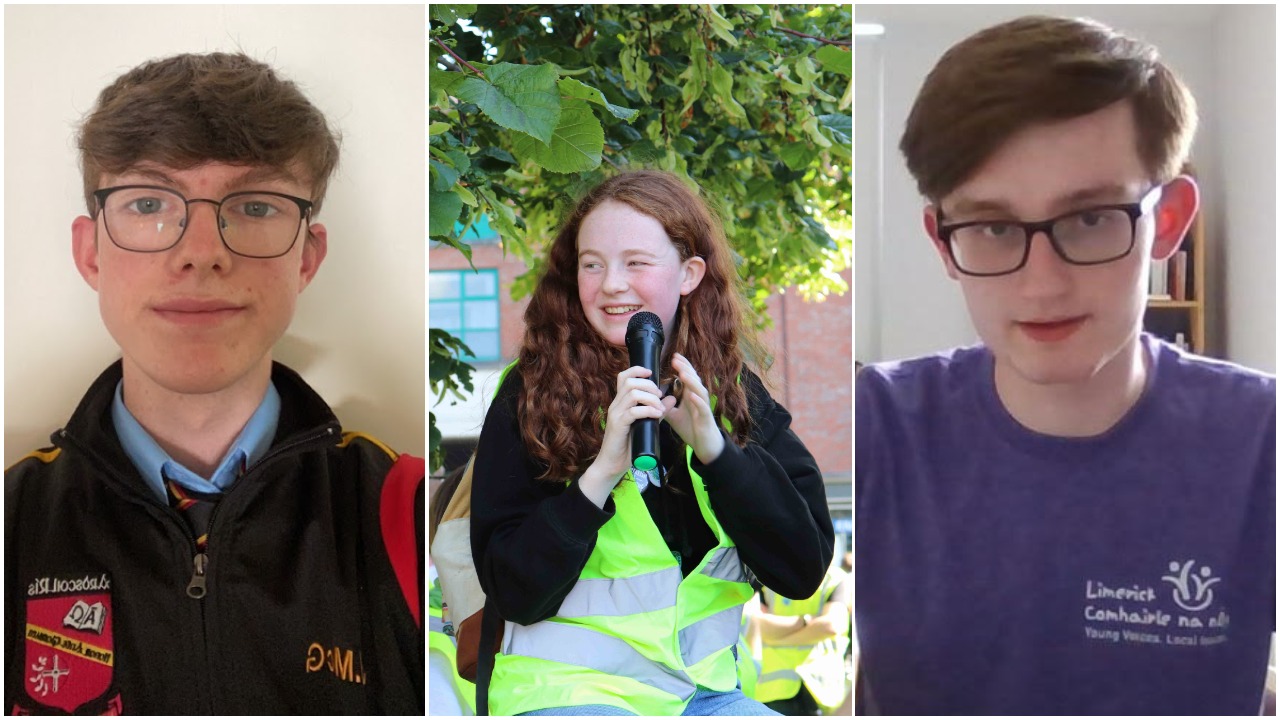 Three second-level students from Limerick have secured terms as officers for the year in the Irish Second-level Students’ Union (ISSU) Annual Assembly elections and will be representing their peers at the national level for the upcoming year.

Saoirse Exton, a TY student from Gaelcholáiste Luimnigh, has retained her position as Equality Officer for a second term. Saoirse is a well-known climate activist who was previously nominated for Limerick Person of the Year. She will be joined on the ISSU National Student Executive (NSE) for the 2021-22 year by Eoin Connolly, a fifth-year student at Villiers, who has been elected to the position of Secretary and Jack McGinn, a third-year Ard School Rís student who is the incoming Education Officer. Jack was a member of the Education Working Group for the past year. All three are excited about their roles and keen to get stuck into the new year.

Saoirse said, “On May 9th, 2021, I was elected for a second term as the Equality Officer of the ISSU, where I will be sitting alongside 12 other young people from across Ireland. The 2021/22 term begins on July 10th, and I am looking forward to working with this brand-new executive to plan for a brilliant year.”

She added, “This year, the ISSU has demonstrated just how important and powerful the student voice is. Limerick is now the most heavily represented county and city out of any on the executive, as opposed to last year where I was its sole representative.”

This is the second year in a row that the Annual Assembly was held online, due to Covid restrictions. Student members voted in 12 officers for the NSE, all of whom will hold their positions for the coming year. The ISSU has been central in communicating the needs of students to the Department of Education throughout the Covid crisis, in addition to their work on inclusion, student welfare and championing other student issues.

Comhghairdeas to the newly elected Coiste Gnó (NSE) and Monitoring & Advisory Committee!
Best of luck to them all, they'll be taking office from July 10th.
Go n-éirí an t-ádh libh! pic.twitter.com/iOG9y2CbFx

Jack said, “I’m extremely grateful that my peers have chosen me to represent them on a national level. In my role as Education Officer of the Irish Second-Level Students’ Union (ISSU), I will deal with the State Exams 2022 and a reform of the Senior Cycle among many other things. It was surreal finding out that I was successful in my bid. I cannot wait to get working when I take the ropes on July 10th.”

Virtual campaigning for the elections lasted a week, with official hustings on Monday, Tuesday and Saturday of last week. Voting took place on Sunday at the Annual Assembly as well as debates on Constitutional Amendments and Directive Policy for the union. There are more students from Limerick on the NSE than from any other county this year, with a majority of the 13 incoming officers also being from Munster.

Eoin said, “In my role, I will be responsible for helping coordinate NSE meetings, agendas and minutes and communicating these to other ISSU bodies and members making sure everyone is kept in the loop about NSE discussions and decisions. I’ll also be assisting other NSE officers when needed. I’m really looking forward to starting and in particular, I’d like to work with relevant officers on issues such as Leaving Cert 2022 and students with Special Education Needs.”

Founded in 2008, the ISSU is the national representative body for school students in the Republic of Ireland. The ISSU is led by students, for students. Membership is based on the student council model, and the ISSU aims to provide support, training and assistance to member student councils.

Through this support, the ISSU aims to foster a stronger student voice at all levels of the education system. School students should be involved in all matters that directly affect them, and this means having a seat at the decision-making table and being respected as an equal stakeholder.

It’s great to see Limerick students taking such a pivotal role in this national organisation.

For more information about the ISSU go HERE