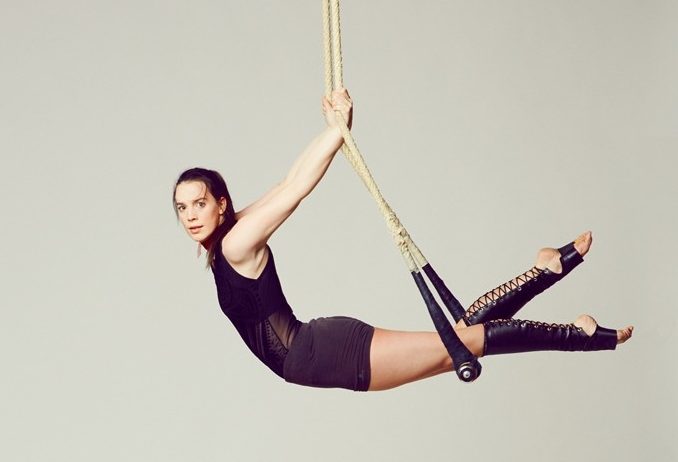 Jess O’Connor is an amazingly talented and outstandingly dynamic and versatile aerial artist who undertook extensive training in a range of circus skills following an extremely successful career in gymnastics.

As well as having a foundation degree in Circus Arts from the National Centre of Circus Arts (formerly Circus Space) in London, this brilliant artist also holds a B.A degree in Film and Television from the Galway-Mayo Institute of Technology under her belt.

Recently Jess found her career going to the next level when she ended up working with NoFit State for their last stand of their 2014 tour of Bianco at the Biennale Internationale des Arts du Cirque, Marseille which is a month long circus festival. She tells me” I was standing in for one of their performers who was injured and unable to do the stand. I flew to Cardiff and had a quick costume fitting and meeting with the director Firenza Guidi and then flew to Marseille the next day. I had 3 days to learn the show before we opened. I had numerous different roles and was on various equipment, rope, hoop & harness.
It was very intense and stressful at the start but the company was great. Everyone was very supportive and encouraging so I had settled into the show in no time. We performed for 3 weeks, 7 shows per week working 6 out of 7 days and we had numerous sell out shows and got a huge response from the French audience. It was an absolutely unreal experience and I was delighted to be a part of it. Really looking forward to starting my traineeship with them at the end of April 2015 which will see me performing in their 2015 tour of Bianco!” You can find NoFit State here.

Previous work carried out by Jess has brought her to perform in a variety of settings from large scale corporate events, festivals and parades, to music videos and nightclubs.

As well as being a professional performer and artist Jess is also a qualified and patient tutor who has taught an assortment of aerial and acrobatic skills to people of all ages.

Her endless skills and expertise has brought Jess to all parts of the world from Ireland to the United Kingdom, from France to Spain and as far as China.

Her abilities seem to be limitless. Jess appeared as an acrobat and character in Fox Jaw’s music video “Kerosene” and performed for the Chinese New Year Night Parade in Hong Kong. She has worked alongside Jedward as an aerial silk performer for the “Jedward Carnival Tour” at the Grand Canal Theatre.

She has performed at festivals including Body and Soul, Limerick’s Elemental festival, the Galway Aboo Festival and at the LegenDerry Maritime Festival. Other noteworthy events include her performance at the Google Winter party and performing aerial cocoon at the Volvo Ocean Race in Galway.

To contact the exceptional aerialist, acrobat and circus artist Jess O’Connor you can email her at [email protected] or call 0871221344.

Why not take a look at Jess’s showreel and see for yourself just how incredible, astounding and talented she really is!