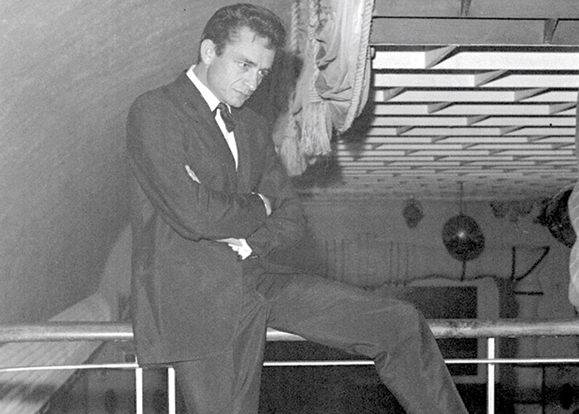 International singer Johnny Cash first visited Ireland in 1959 and was enraptured by its beauty. His visit to Ireland inspired his hit song ‘Forty Shades of Green’ which is still widely listened to now.

Johnny’s trip to Ireland inspired not only a song but also to name his fourth daughter ‘Tara’ as during his visit he encountered a terrible storm, which forced him to take shelter in a barn near Tara in County Meath.

Although “Forty Shades of Green’ was written in 1959, it was not released until 1961. The song was a hit in Ireland which encouraged Johnny to undertake his first tour of Ireland in 1963 where had earned the adoration and love of the Irish after the release of ‘Forty Shades of Green’.

This was not some pre-fame thing – the 31-year-old country music legend had already sold 11 million records and had just released his smash hit, Ring of Fire.

The Jetland opened its doors to the people of Limerick on July 31, 1963, with a performance from Brendan Bowyer and the Royal Showband, followed by the Clipper Carlton on August 3. It was the largest ballroom in the South of Ireland and could easily fit over 2,000 people inside.

It was named Jetland because of its vicinity to Shannon Airport which was then in its infancy. When the Jetland closed as a ballroom it was purchased by Dunnes Stores and was redeveloped in 2005 and is now a large shopping centre.

Whilst on his tour around Ireland he stopped at some very famous venues around Ireland, including the famous Jetland Ballroom, Limerick. Cash was accompanied by his band, The Tennessee Three, and by June Carter. Carter, who would marry Cash in 1968, was described in the Irish media as “America’s Glamorous Country and Western Queen.” It proved to be an intense schedule, Cash and his band performing 17 shows in 14 locations over an 11-day period. Their final concert was in the National Stadium in Dublin, but most venues were small and part of the showband circuit. They included the Granada Ballroom in Kingscourt, County Cavan, (which marked the commencement of the tour), the Carlton in Kilkenny, the Adelphi in Dundalk, the Jetland Ballroom in Limerick, the Majestic Ballroom in Mallow, the Lakeland Ballroom in Mullingar, and the Palladium Dancehall in Rush, near Skerries. Johnny played at Jetland on October 17, 1963.

In July 2020, RTÉ released a Documentary on RTÉ Radio One named ‘Johnny Cash’s Lost Tour of Ireland’. This documentary took a closer look at the tour, the venues, and the town. The documentary became possible with the discovery of a recording made 55 years ago by Enda Shortall and his boss, who provided the sound equipment for the National Stadium gig on the tour. The recording is a unique piece of musical history, transporting listeners back to this exciting time in Cash’s life. Johnny Cash

This documentary was created with the hopes of bringing listeners up close to Johnny and speaks to some of those lucky enough to attend the shows and played support on the tour. Cash died in September 2003, only a few months after his beloved June had passed away. He was aged 71. The world mourned the loss of “the man in black”.

For more stories on interesting history in Limerick, go HERE

Related Topics:johnny cash
Up Next