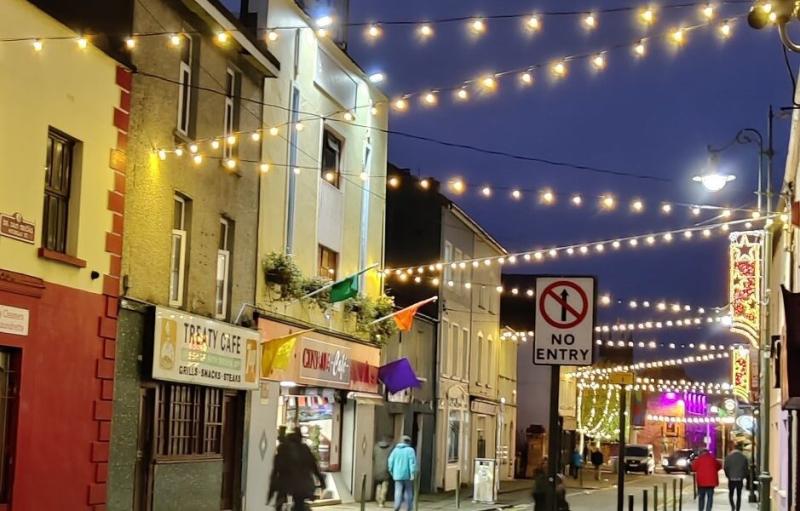 Limerick Christmas festoon lights around Thomond Bridge, Nicholas Street and Davis Street will remain up all year round.

Pictured just before the switching on of the lights on Nicholas Street are Maura O’Neill of Limerick Tidy Towns; Leslie Cowpar and Kieran Lynch of Folyn Electrical; Catherine Caball; Mayor Daniel Butler, and Liam Dooley.

The Christmas festoon lights strung among Limerick City will now remain up all year round.

The lights, which have received a positive reaction from the community, are hung up in areas such as Thomond Bridge, Nicholas Street and Davis Street.

The lights allow the streets of Limerick to be lit up in the evenings and have been described as “transformational” for city dwellers.

A bulb replacement programme is now underway, ensuring that the lights look their very best in 2022.

The idea to keep the streets illuminated was that of Mayor of Limerick City and County, Daniel Butler.

“Delighted to confirm that Limerick Council has agreed to my request to keep up the non-festive lighting including Nicholas Street, Foxes Bow and Davis Street,” Mayor Butler announced on January 18.

This recent decision to keep the lights up has had a big impact on the area, creating a special atmosphere in the streets of Limerick and making people feel safer.

Many described the lights as “beautiful” and commented on their hope that this would happen upon the lights initially being hung up around the city.

The Christmas lights on Nicholas Street were switched on in the presence of Mayor Butler on November 16, 2021.

The lighting project was led by Catherine Caball of St. Mary’s Cathedral and was supported by Limerick City, County Council and Limerick Tidy Towns.

The lights were installed by Folyn Electrical and were financed through a grant from Electric Aid.

“This lighting, in addition to the painting that recently took place, creates a warm and welcoming atmosphere for tourists and locals alike,” The Dean of the Cathedral, the Very Rev’d Niall J. Sloane commented.

“I encourage people to come and see the good work that has taken place and take the time to enjoy this beautiful part of our city.”

To learn about the history of Nicholas Street, go HERE