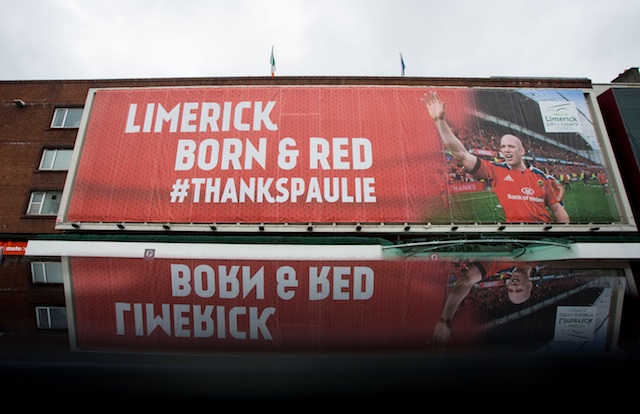 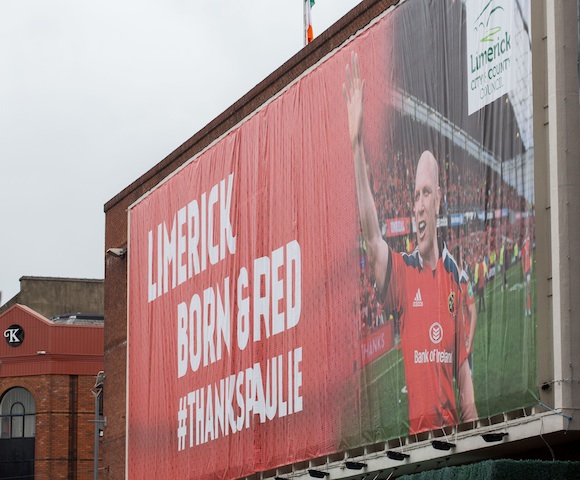 01.07.2015
Limerick City and County Council has erected a giant poster of Paul O’Connell to pay tribute to the rugby legend ahead of his Munster departure and international retirement later this year. The poster was hung on Brown Thomas, O’Connell Street, Limerick in the early hours of Wednesday, 1st July 2015. Picture: Alan Place/Fusionshooters.

Limerick honours Paul O’Connell. A giant billboard poster has been erected in Limerick City’s main thoroughfare of O’Connell Street in honour of Paul O’Connell, who announced his retirement from rugby this week.

Limerick City and County Council has installed the banner featuring a photo of the former Munster and Ireland star and the caption of ‘Limerick Born and Red’.

Councillor Liam Galvin, Mayor of the City and County of Limerick said the gesture is representative of the “warm affection with which Paul is held by the people of Limerick.”

“Paul has been a wonderful ambassador for Limerick and for the sport of rugby and it is only right and fitting that we pay this public tribute to him,” said the Mayor.

“Paul has created some wonderful sporting memories for the people of this country throughout his illustrious career with Munster, Ireland and the Lions. He has in no small way helped to establish Limerick as a sporting capital in Ireland and I have no doubt that he, as  Freeman of Limerick, will continue to be a key figure in local sport and the community for years to come.

“Paul is thoroughly deserving of the plaudits he has received from the highest level of society in recent days and on behalf of the Elected Members of Limerick City and County Council and the people of Limerick, I want to wish him the very best for the future,” said Mayor Galvin.

The poster was hung on Brown Thomas, O’Connell Street, late Thursday night (11 February 2016). The public are invited to celebrate Paul O’Connell’s rugby career by using the hashtag #ThanksPaulie on Twitter. I Love Limerick would like to congratulate and thank Paul for all his tremendous work that he has done for Limerick city.

You can keep up with Paul O’Connell on his social media account Twitter, here
For more related stories by the I Love Limerick team, click here

A Tribute to Gemma Carcaterra