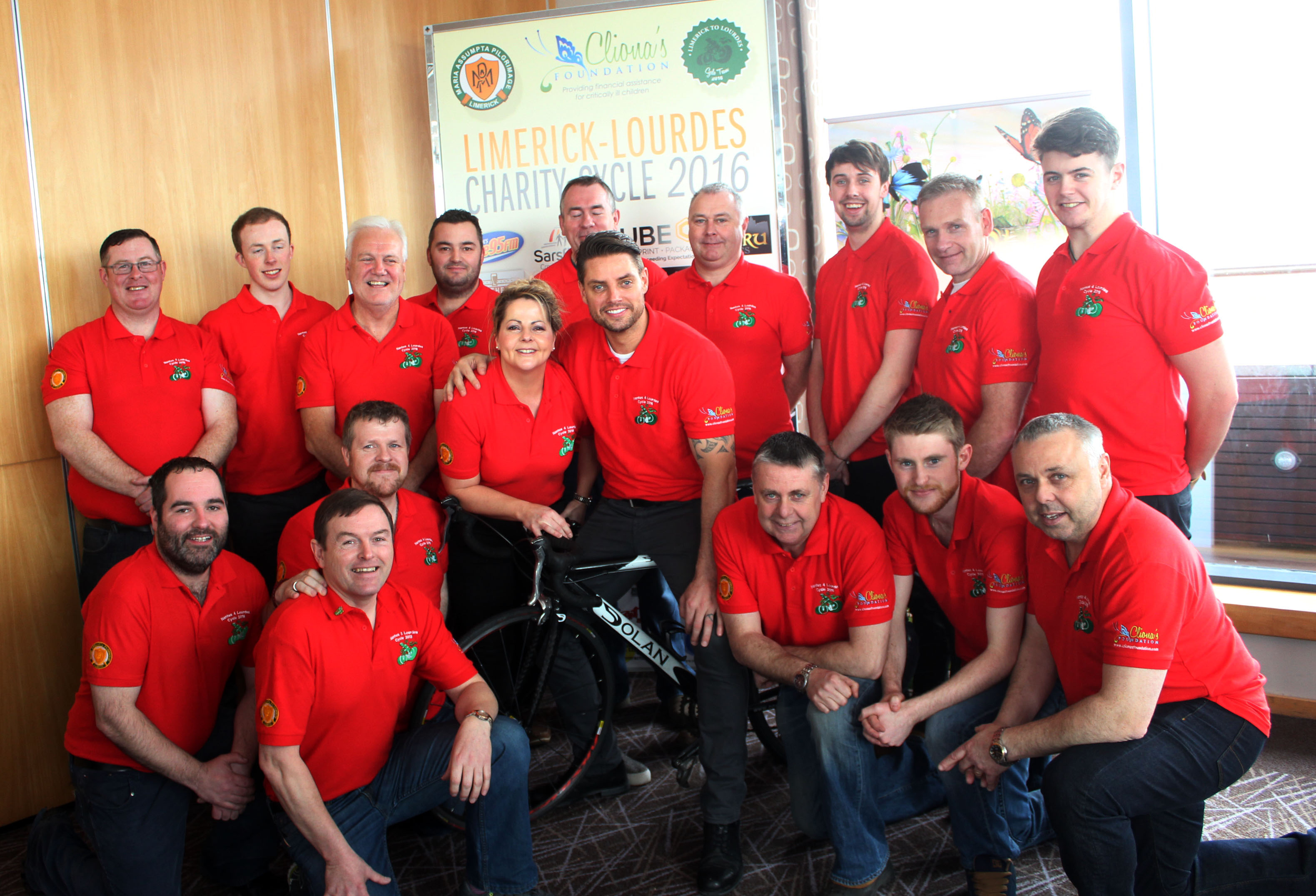 Pictured at the launch of the Limerick To Lourdes Charity Cycle 2016 at the Strand Hotel, Keith Duffy with members of the team cycling to Lourdes. Picture Michael Cowhey.

A fashion show in aid of Limerick to Lourdes Charity Cycle 2016 will be held on Wednesday April 13 at Woodlands House Hotel Adare, Limerick at 8pm.

In 1858 Our Lady appeared to Bernadette Soubirous in Lourdes and so in 2008 to celebrate the 150th anniversary of the apparition and to raise awareness of the Limerick Lourdes Pilgrimage a group of people from Limerick and surrounding areas came together to organise a charity cycle from Nantes to Lourdes to coincide with the Limerick Diocesan pilgrimage. The 800km cycle took place between June 14 and 20 2008.

Eight years on Keith Duffy launched the fourth and final cycle from Nantes to Lourdes. Keith said, “I am delighted to launch this mammoth cycle for two worthy charities and wish all participants every success with their endeavour.” Over the previous three cycles they have raised over 150,000 for the nominated charities. This year we will be raising funds for Limerick Lourdes Invalid Fund and Cliona’s Foundation.”

No one thought this cycle would entail 800km of road, logistic organisation, medical teams and a lot of goodwill sponsorship. From a very ordinary conversation has come a very extraordinary group of people and supported by even greater people to make this cycle happen.

This year some of the original cyclists and backup team, along with some new recruits will once again take on this journey. The cycle will take place between June 14-19, travelling 800km through Nantes, La Rochelle, La Royan, Bordeaux, Mont Du Marsan, Lembeye and into Lourdes.

The cyclists themselves vary in fitness, size and age with 18 cyclists and 6 of a backup team embarking on this journey once again. All of the team are in active training in order to complete this cycle and arrive in Lourdes safe and sound on June 19. Thanks go out to all the sponsors and to all the individuals who have supported this journey. All of the team are actively working on different fundraising ideas from coffee morning, come dine with me, cycles, cinema days, golf classics, fancy dress night, raffles, calendars and of course the fashion show.

A night of fabulous fashion with womenswear by Caroline Mitchell, Bella Sola, Sinead’s, Catherine McCormack & Aisling Maher. Not forgetting the menswear by Mike O’Connell Menswear. Fergal Deegan will MC on the night, there will be a craft fair, wine and cheese reception and plenty of prizes on the night. Tickets are 20 euro.

For more information check out the Fashion show event here

The GAFF Fundraiser in the Kasbah Social Club