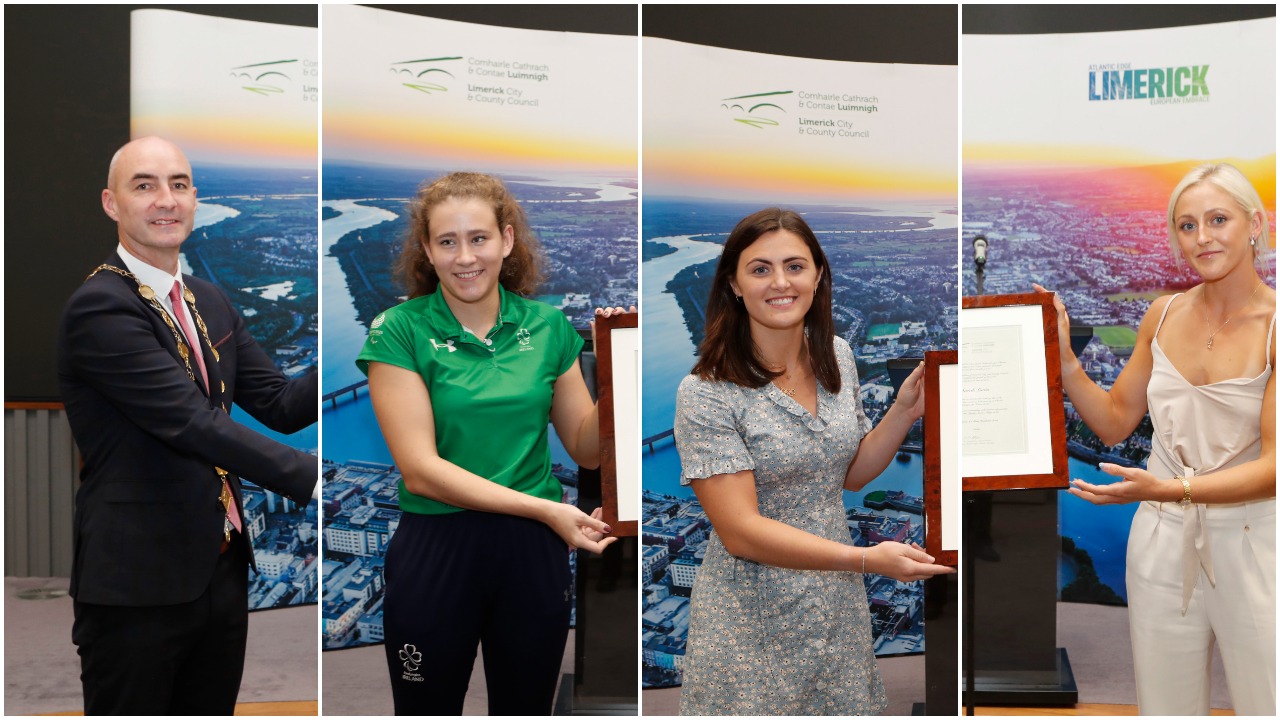 The mayor honours Limerick Olympians with a mayoral reception which took place on Thursday, September 23 at 6pm in the Council Chamber Dooradoyle, to honour our local Olympic and Paralympian athletes.

Speaking to I Love Limerick, Mayor Daniel Butler said, “I was delighted to be able to honour our amazing sports people who represented us with such pride at both the Olympics & Paralympics along with someone who played such a huge part in that Olympic story over many years.

I was particularly proud to honour 5 women of sport who are incredible role models for other young women in our city and county.

I am so proud of them all as first citizen and honoured to be able to acknowledge their incredible commitment, hard work and sacrifice to achieve all they did. Huge credit also goes to their family and friends who support them so strongly taking them to training in the dark winter months to ensure they succeeded. We are so grateful to them.”

Róisín competed in the Tokyo Olympics as part of the Irish Women’s Hockey Team. The Janesboro native is an Irish international hockey player and is a World Cup Silver Medallist 2018.

The 16-woman squad for the Olympics were selected by Team Ireland and the hockey players were selected after the Euro Hockey Championships which took in the Netherlands.

Sarah was selected by Team Ireland to be a member of the Athletics Track and Field team to compete in the Women’s 100m hurdles at the Tokyo Olympics.

The Lisnagry athlete became only the second Irish woman to ever break the 13-second barrier in the 100m Hurdles at the World Athletics Continental Tour silver meeting, running a personal best (PB) of 12.95 on the occasion.

Sarah is also only one of twenty-four other Irish athletes who are chosen to take part in this year’s Olympic Games.

Drombanna native Róisín represented Ireland at the Summer Paralympics. The 16-year-old was the youngest member of the five-person swimming squad. She competed in 6 events, beating her PB in many of them. Róisín, who is visually impaired, is in her 5th year at Gaelcholáiste Luimnigh.

Greg was part of the Irish team for the Rugby 7s at the Tokyo Olympics.

The Irish Rugby 7 squad secured a final place in the Men’s Sevens competition at the Tokyo Olympics after a six-year journey from the lowest division of European Sevens Rugby right to the top.

The Limerick native holds a unique record for the first ever Love Island winner to compete in the Olympic Games.

Ireland joined the World Rugby Sevens Series as a “core status” team for the first time for the 2019–20 season. In their first tournament, the 2019 Dubai Sevens, Jordan Conroy led all scores with seven tries and was named to the tournament Dream Team.

Pictured above is Mayor Daniel Butler and Laura O’Shea who accepted on behalf of her brother, Greg. Picture: Liam Burke/Press 22

Carolyn competed in the Women’s Triathlon at the Games this year.

The Newcastle West native began pursuing her dream of representing Ireland in the Olympics in 2018 and put her life as a doctor on hold.

She produced a swift final leg in the triathlon, finishing 23rd at the Olympics, finishing six and a half minutes behind the gold medal winner.

Pictured above is Mayor Daniel Butler and Tony Hayes, who accepted on behalf of his daughter, Carolyn. Picture: Liam Burke/Press 22

Siblings Ben and Megan competed in the Judo event in the Olympics, making them the first Irish brother and sister to qualify for Japan’s national sport.

While the siblings were born and raised in Wokingham, England, they were eligible to represent Ireland due to their mother coming from Bruff. The duo are well decorated in the sport of judo and have been representing Ireland since 2017.

Pictured above are siblings Ben and Megan Fletcher.

Anna, known to some as, ‘mammy of Irish boxing,’ was present at Dublin Airport to greet Kellie Harrington, who won gold during for the Women’s Lightweight boxing event.

Anna became involved in boxing after meeting her husband, Seamus, who owns St Francis Boxing Club, which has had 4 generations come through the club.

The I Love Limerick crew would like to congratulate all of them for their fantastic achievements.

For more about the Olympics go HERE

For more stories about the Olympics go HERE