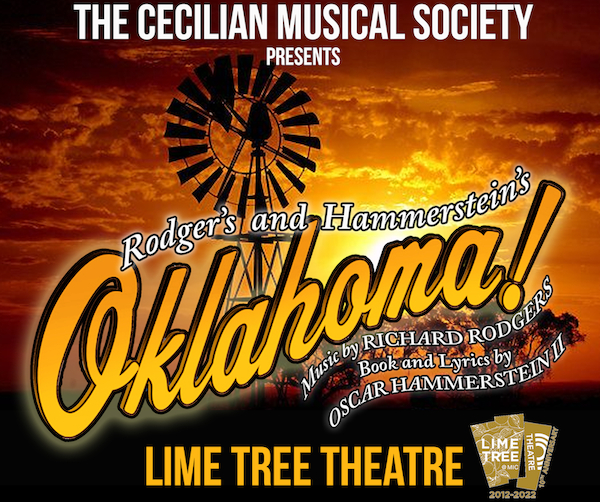 Oklahoma at Lime Tree Theatre is set in Western Indian Territory just after the turn of the 20th Century. The feisty rivalry between the local farmers and cowboys presents the backdrop for the love story.

Having celebrated their 100th anniversary in style in 2019 with an extended sold-out run of ‘Chitty Chitty Bang Bang’, Cecilians make their long-awaited return to the stage with the iconic Oklahoma! at Lime Tree Theatre.

The first collaboration of famed partners Richard Rodgers and Oscar Hammerstein, Oklahoma! is set in Western Indian Territory just after the turn of the 20th Century. The feisty rivalry between the local farmers and cowboys presents the backdrop for the love story between Curly (Barry Danaher), a handsome cowboy, and Laurey (Hilary Phayer), a charming farm girl.

Darker elements of the west are explored through the character of Judd Fry (Aidan O’Connell), a mysterious and dangerous outsider.

Iconic music such as Oh What a Beautiful Mornin’, I Can’t Say No, and the title song Oklahoma! is sure to have audiences a hootin’ and a hollerin’ in the Lime Tree Theatre.

Returning to the stage also are Cecilian Stalwarts of Gráinne Hartnett and Brian Henry who play the roles of Aunt Eller and Andrew Carnes. Chairperson Hilary Phayer is extremely excited about staging Oklahoma!

Hilary said, “It’s always challenging when you stage such a beloved show. But I’ve seen the production blossom in rehearsals over the past number of months and I’m confident audiences will come away from our Oklahoma! with new perspectives on this iconic piece. The production team have pulled out all the stops to breathe new life into this wonderful piece of theatre!”

The Cecilians are delighted to welcome back the multi-award-winning production team of Des Henn (Director), Barbara Meany (Choreographer) and Michael Young (Musical Director) as they delve into the intense rivalry of the farmer and the cowman. This show will sell out, so get your tickets quick!

The show will run from Wednesday, November 23 – 26 in the Lime Tree Theatre. Tickets are €25.00, with discounted rates available for students and senior citizens. Doors open at 7 pm, with the show beginning at 7:30 pm sharp.

Get your tickets to Oklahoma at Lime Tree Theatre