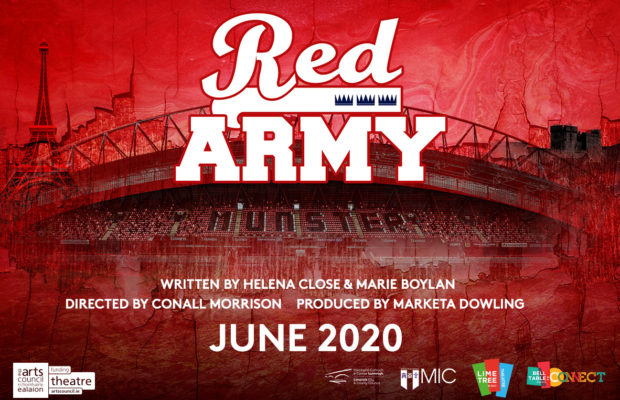 Red Army is a tragicomedy celebrating the best of Munster Rugby focusing on Munster women as pundits and fans.

Lime Tree Theatre and Belltable:Connect are delighted to announce that they have been awarded special funding to produce a new original play Red Army, celebrating Munster rugby fans this June. This is in addition to our normal core funding from the Arts Council. Red Army is a tragicomedy celebrating the best of Munster Rugby focusing on Munster women as pundits and fans.

The play is the creation of two Limerick writers Helena Close and Marie Boylan. Lime Tree Theatre and Belltable:Connect have supported Helena and Marie for the past two years as they have developed the play. Red Army producer Marketa Dowling has also confirmed the acclaimed director Conall Morrison is on board.

This is an enormous vote of confidence in theatre in Limerick, following on from the great success of Bread Not Profits by Mike Finn back in April 2019. It is a testament to the work of the local arts community that our stories, the stories that are unique to Limerick but with universal resonance, are being told by them, on our stages.

The play focuses on four middle-aged diehard female Munster supporters from Limerick. They have been members of Munster’s Red Army for over a decade. From staying in a brothel in Castres to singing ‘Stand up and Fight’ on a tram in Treviso and winning both Heineken Cups in Cardiff- they’ve been there. Now we find them in Paris for the first match of the season in October 2016. But after years of their glorious team coming agonisingly close to reaching the expected exalted heights, the cracks begin to show in their friendship. When team manager, Anthony, “Axel” Foley, dies unexpectedly hours before kick-off, it acts as a catalyst for honesty in their friendships as we shadow them from Paris back home to a grieving Limerick. Their own personal stories unfold across a pivotal week, charting their friendships, their loves, and their daily lives in the shadow of Axel’s death.

The Lime Tree Theatre will continue to programme at the scale and quality that our mid-west audiences have become accustomed to. Red Army will run in the Lime Tree Theatre from June 3rd to 6th for 5 performances only. The full cast will be announced closer to the time.

For more information on Red Army and to purchase tickets, click here