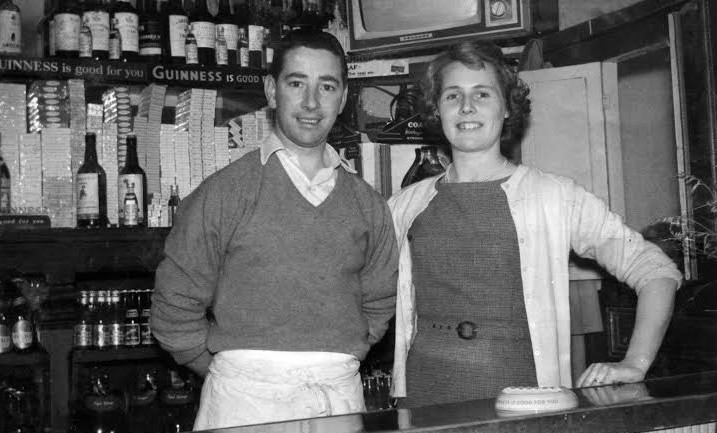 A tribute to my dad Eric Lynch

Eric Lynch pictured above with his wife Florence.

Eric Lynch – A tribute to a Limerick publican and father

I want to pay tribute to one of Limerick’s true gentlemen, my father Eric Lynch who passed away peacefully last week at the University Hospital Limerick surrounded by his entire family as we sang our favourite family songs.

My father and my mother Florence used to own the legendary pub bearing his name on St Joseph’s Street. I am one of eight children and we all lived upstairs overhead the pub. The pub was synonymous with good times, a great atmosphere and above all, a first rate music scene for four decades and they sold it in 1997, after my mother was diagnosed with Parkinson’s Disease. Many Limerick people have wonderful, nostalgic memories of the pub, with my mother playing the piano and my dad singing songs. Everywhere I go in Limerick people always ask after my parents. I come from a background steeped in history and I am incredibly proud of my heritage. My parent’s pub was the first pub in Limerick to have music, the first to get a music licence. There were two people who worked at the pub who were an integral part of the history of Eric’s. Cam Davern worked with them for over 30 years in their business and she was affectionately known as ‘Abbe’ by all the family and John O’Donnell who was the MC for every singsong session and who would call all the customers up to sing their favourite songs. I remember as a child lying in bed upstairs as the sound of all the old songs played below.

Eric singing while his wife Florence accompanied him on the piano in their home in 2008. Picture: Eleinor Reidy Barry.

The pub was also famous for its 10 pence a game pool table and my dad kept the price at 10 pence for decades. Back in the early 80’s our pub was also one of the first to show movies as we got a Betamax video player when they first hit the market. I remember the front lounge of the pub thronged with people who came to see screenings of the movies. I worked in Video City, 51 Thomas Street from the age of 11 so we were never short of movies to screen at the pub. My parents worked incredibly hard, 7 days a week, 365 days of the year, even on Christmas Day and Good Friday. I think that’s where I got my work ethic, as I love to work, it keeps me sane.

Dad purchased the pub from Stevie Coughlan, who was Mayor of Limerick twice, during the 50s and early 70s. When my parents eventually did close the pub my mam went on to play the piano for nine years in the Old Stand pub as the culture of music was such a huge part of their lives and they could not let it go. Eventually my mother’s health deteriorated and she could no longer continue to play, but she would play for my dad at home and he would sing her all the old love songs. I lived in New York for over 15 years but eventually came home in 2008 to care for my parents, as I could not bear to be apart from them.

My parents are very loving, kind, liberal people who always put an emphasis on the importance of loving one another. I organised the first week long LGBT Pride Festival in the city in 2008 and my parents came to the parade to support my community. After that they would try to come every year and one of my siblings would wheel mam down in her wheelchair to the top of O’Connell Street with my dad to watch the parade as it passed. My father simply could not understand how anyone would have an issue with gay people. Why would you have a problem with a person unless you had a problem with yourself? He recalled a day back in the 1950’s when a group of bullies were beating up Stevie Shinnors, the only known gay man in the city at the time and my father jumped to his defence and they all fled. My dad was a very gentle person, but very strong and was also a boxer. He would always be the first person to defend the vulnerable and if he read sad news or saw it on TV he would be genuinely concerned and distressed to see anyone suffering.

I Love Limerick would not exist, if it were not for my parents. I have done it voluntary and unpaid for almost 8 years, not because I have no self worth, but because my greatest thrill was to see the smile on my parents face every week when they opened up the Limerick Chronicle newspaper to read about their son in his I Love Limerick column, working hard to try make a difference and to do something positive with his life.

I am campaigning for a yes vote for marriage equality in the referendum on May 22, as my beloved father believed in equality, love and pride. He would have voted Yes and he was 86 years of age. Yes, that’s right, my dad was a freedom fighter, ahead of his time and without a doubt he believed that everyone had a right to love and be loved. Both mam and dad were married almost 60 years and were madly in love. He would have wanted the same for me and for everybody else. I am sure right now he is singing with the angels in heaven.

Please turn out to the polling stations on May 22. Be sure you are registered to vote, Vote YES, for your friends, for your family and your loved ones! For more info go to www.yesequality.ie or www.marriagequality.ie.