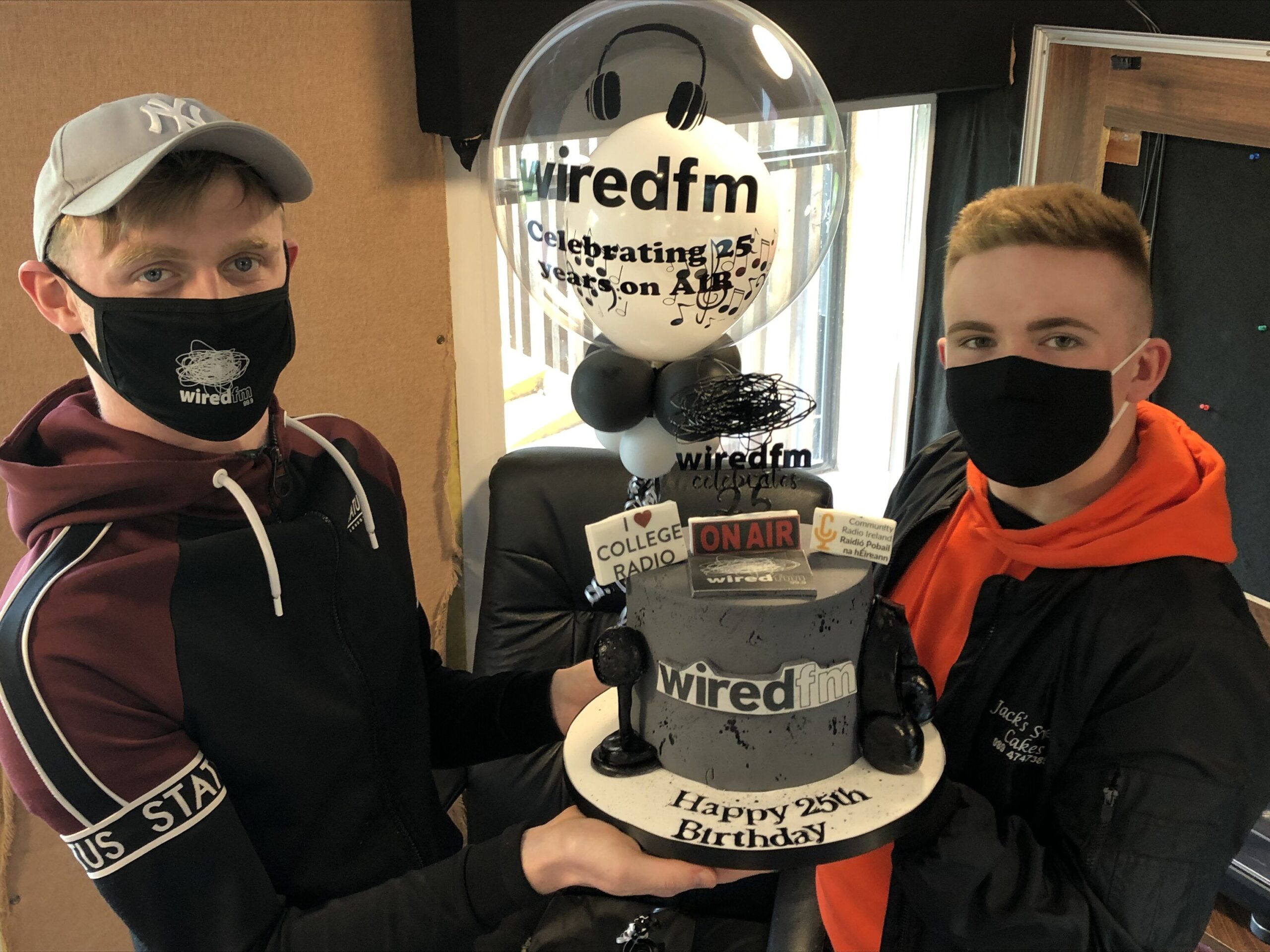 Wired FM will feature a wide range of guests, including a whole host of MIC and Wired FM alumni who will be sharing their memories of their time at the station.

Wired FM, Limerick’s student radio station, located at Mary Immaculate College (MIC) and Limerick Institute of Technology (LIT), celebrates Wired FM 25th anniversary on air today (30 April). As part of its 25th anniversary celebrations, the station will broadcast a schedule of special programmes throughout the day looking back on the past 25 years on the airwaves, as well looking forward to what the future holds for the student radio station.

From 12–4pm today, Wired FM will feature a wide range of guests, including a whole host of MIC and Wired FM alumni who will be sharing their memories of their time at the station. Amongst the special guests who will be featured on today’s 25th anniversary show are Today FM presenters Dermot Whelan and Dave Moore, political correspondent with Virgin Media News and Newstalk presenter, Gavan Reilly, and well-known economist and writer, David McWilliams, who will be discussing the importance of student media, the current media landscape, and Wired FM’s place in it. In addition, the station will today launch an exciting new initiative, Downloading Limerick, whereby everyone connected to Limerick city with a story to tell will be invited to submit an audio recording. These recordings will feature as part of a specially produced series, as well as being archived online for all to hear.

The station, which has been located on MIC’s Limerick campus for the past 25 years, has been managed by Ray Burke for the past 7 years. Recalling some of his highlights during his time at the station, Ray notes the importance of the partnership between MIC and LIT on the project and how this partnership reflects both Colleges’ commitment to delivering this unique service to all students in Limerick, irrespective of which third-level institution they are attending.

According to Ray, “Wired FM offers so many opportunities for the learning and development of students. Not only do we provide a source of specially tailored programming for student listeners, but the content is produced by students for students. This type of community of interest and public service radio broadcasting plays a vital role in the creation and development of a democratic culture and an active civil society. It’s a forum for the cross pollination and exchange of ideas, especially with Wired’s unique set up, where there are multiple colleges and campuses involved in the partnership.”

For Ray, applying for the 10-year licence in 2016 and subsequently signing the contract with the Broadcasting Authority of Ireland in 2017 is one of his proudest moments at the station. He also cites the many awards won over the past number of years, including a Student Media Award in 2018 for ‘Best DJ in Ireland’, as well as the numerous courses in media expression offered by the station to groups so often underrepresented on Irish radio. The station’s latest course, Mincéir Media, is aimed at members of the Travelling community, while a summer camp for migrant children is planned for the coming months, if restrictions allow. In addition, the station has also begun a large-scale Erasmus+ project called SNAP – Sexuality Intimacy Art Podcast with partners in France and Serbia.

The past year has brought its difficulties for the station but according to Ray, the students have risen to the challenges posed by the pandemic. He said, “I am really proud of the team this year who have been doing their shows remotely, which is considerably tougher than coming into the studio to do it. We have managed to stay on air throughout the restrictions and while it’s been very challenging, it has also been extremely rewarding too. There are so many volunteers that I haven’t met in person yet, who I have trained online, and who have been producing fantastic shows from their bedrooms. The level of commitment has been inspiring and motivating.”

? Tune in from 12pm-4pm today for the celebrations where a whole host of #MIC & #WiredFM alumni will be sharing their memories of their time at the station.

He added, “There are so many things to be proud of really, especially when you hear people talk so affectionately about their time at the station. The real excitement and pride though come from watching students develop over the years, whether that’s just people coming out of their shell, or them going on to media jobs after their time at Wired FM.”

In congratulating Wired FM on its 25th anniversary, MIC graduate and multimedia journalist with RTÉ News, Maria Flannery, said, “25 years of Wired FM, and what a legacy. Starting at Wired as a fresher at MIC was the very first step in my media career. The start of everything for me. I made friends for life on our entertainment show, interviewed celebrities and even accidentally played the dirty version of 212 by Azealia Banks. Happy anniversary Wired, here’s to the next 25 years.”

MIC graduate, Eimear O’Mahony, volunteered at Wired FM from 1997 to 2001 and is currently an executive producer with RTÉ Children’s and Young People programming. She said, “They were the best years of my life in MIC and my time at Wired FM is directly related to where I am now. I’ve been in RTÉ 20 years now where I’ve worked in sport and current affairs, and produced ‘The Late Late Toy Show’, ‘Up For The Match’ and ‘Winning Streak’. I’ve done the lot and it’s all down to my time at Wired FM.”

For current MIC students, Wired FM is an important connection to student life while they study from home due to public health restrictions. According to first-year student Sarah Ryan Purcell, “As a first-year student who has yet to set foot on-campus, volunteering at Wired FM has really helped me to feel a sense of belonging to the college community. I am studying Education and Psychology at MIC but my experience at Wired FM is enticing me to pursue a hybrid career in media and education.”

For third-year Bachelor of Arts student, Calvin Leahy, volunteering at Wired DM has meant radio is now a big part of his life and has led him to work with other radio stations across Limerick over the past number of years. He said, “My time in MIC has been great but being able to work with Wired FM and being able to present shows every week during the semester has brought such an energy to me. I am grateful to all the Wired FM crew and to Ray Burke especially for giving me the space to spread my wings and experience life behind the mic.”

Finally, for Eimear Collins, a second-year Bachelor of Arts student, her volunteer work at the station has meant that she has learnt so many new skills which she never thought possible so early on in her studies. She said, “I was given a fantastic opportunity to have my own radio show and now I know what it takes to produce a show from start to finish. Wired FM is a great station, which I know has benefited me and my future in so many ways. It has given many like me over the past 25 years first-hand experience of being involved in a live radio. I would recommend to anyone who is studying in MIC or in Limerick and who is interested in pursuing a career in media to get involved. You will not regret it!”